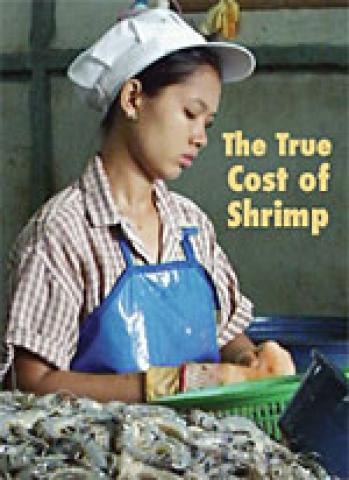 The study, The True Cost of Shrimp, compares the abuses in the shrimp industry to sweatshop conditions in the apparel industry. Click here to read or download the report.

Every year, Americans eat more than 450,000 tons of shrimp, about three pounds for every man, woman and child in the country. Eighty percent of that shrimp is imported, with one-third coming from Thailand.

Our hope is that the release of this report will illustrate how the “shrimp boom” is sustained through a staggering, largely hidden, cost to workers, their families and the environment. The true cost of shrimp is not what is seen on a supermarket price tag or a restaurant menu. Shrimp industry workers in Bangladesh and Thailand deserve to have their story told. The abuse of their rights, as workers and as people, must be exposed.

Based on accounts from workers in the shrimp farming and processing plants in Thailand and Bangladesh, the report found:

The report quotes workers like “Alam,” a shrimp processing worker in Chittagong, Bangladesh, who says:

None of the workers have gloves or boots or safety equipment to protect us from injury, or waste or pollution. I make 2,000 taka ($30) a month. The rent for my room in Chittagong city, including electricity, comes to 1,500 taka a month. This means I have only 500 taka ($7.40) to spend on food, clothes and anything else.

The report clearly points to the need to fight to end human rights abuses around the world, says Ambassador Mark Lagon, director of the U.S. State Department’s Office to Monitor and Combat Trafficking  in Persons. Says Lagon:

By highlighting injustices such as human trafficking and unsafe working conditions, the report shows us we still have a long way to go in the fight for workers’ rights.