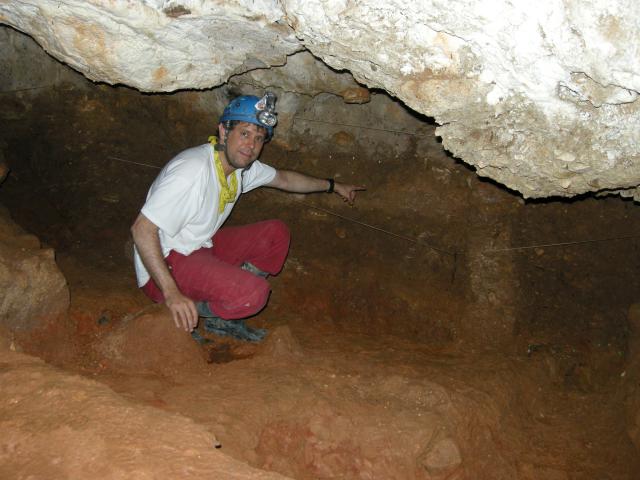 BINGHAMTON, NY — Western Europe has long been held to be the “cradle” of Neandertal evolution since many of the earliest discoveries were from sites in this region. But when Neandertals started disappearing around 30,000 years ago, anthropologists figured that climactic factors or competition from modern humans were the likely causes. Intriguingly, new research suggests that Western European Neandertals were on the verge of extinction long before modern humans showed up. This new perspective comes from a study of ancient DNA carried out by an international research team. Rolf Quam, a Binghamton University anthropologist, was a co-author of the study led by Anders Götherström at Uppsala University and Love Dalén at the Swedish Museum of Natural History, and published in the journal Molecular Biology and Evolution.

“The Neandertals are our closest fossil relatives and abundant evidence of their lifeways and skeletal remains have been found at many sites across Europe and western Asia,” said Quam, assistant professor of anthropology. “Until modern humans arrived on the scene, it was widely thought that Europe had been populated by a relatively stable Neandertal population for hundreds of thousands of years. Our research suggests otherwise and in light of these new results, this long-held theory now faces scrutiny.”

Focusing on mitochondrial DNA sequences from 13 Neandertal individuals, including a new sequence from the site of Valdegoba cave in northern Spain, the research team found some surprising results. When they first started looking at the DNA, a clear pattern emerged. Neandertal individuals from Western Europe that were older than 50,000 years and individuals from sites in Western Asia and the Middle East showed a high degree of genetic variation, on par with what might be expected from a species that had been abundant in an area for a long period of time. In fact, the amount of genetic variation was similar to what characterizes modern humans as a species. In contrast, Neandertal individuals that come from Western Europe and are younger than 50,000 years show an extremely reduced amount of genetic variation, less even than the present-day population of remote Iceland.

These results suggest that western European Neandertals went through a demographic crisis, a population bottleneck that severely reduced their numbers, leaving Western Europe largely empty of humans for a period of time. The demographic crisis seems to coincide with a period of extreme cold in Western Europe. Subsequently, this region was repopulated by a small group of individuals from a surrounding area. The geographic origin of this source population is currently not clear, but it may be possible to pinpoint it further with more Neandertal sequences in the future.

“The fact that Neandertals in western Europe were nearly extinct, but then recovered long before they came into contact with modern humans came as a complete surprise to us,” said Dalén, associate professor at the Swedish Museum of Natural History in Stockholm. “This indicates that the Neandertals may have been more sensitive to the dramatic climate changes that took place in the last Ice Age than was previously thought.”

Quam concurs and suggests that this discovery calls for a major rethink of the idea of cold adaptation in Neandertals.

“At the very least, this tells us that without the aid of material culture or technology, there is a limit to our biological adaptation,” said Quam. “It may very well have been the case that the European Neandertal populations were already demographically stressed when modern humans showed up on the scene.”

The results presented in the study are based entirely on severely degraded ancient DNA, and the analyses have therefore required both advanced laboratory and computational methods. The research team has involved experts from a number of countries, including statisticians, experts on modern DNA sequencing and paleoanthropologists from Sweden, Denmark, Spain and the United States.

“This is just the latest example of how studies of ancient DNA are providing new insights into an important and previously unknown part of Neandertal history, “said Quam. “Ancient DNA is complementary to anthropological studies focusing on the bony anatomy of the skeleton, and these kinds of results are only possible with ancient DNA studies. It’s exciting to think about what will turn up next.”