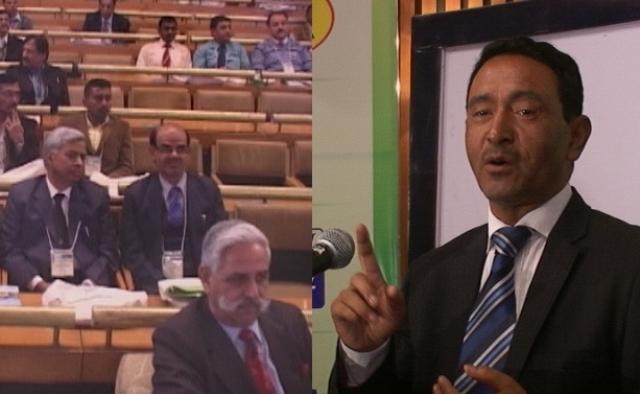 The two day 12th Annual Environment and CSR Global Conference has been organized by Green Tech Foundation, in association with Department of Public Enterprises, Government of India. During the conference the eminent scholars from all over and would deliver their lectures on the theme of sustainable environment.

Jora while sharing his ideas said that the tourism is linked with environment and due to tremendous pressure of tourists at Gulmarg and Pahalgam resorts, the ecological balance has been severely affected, adding that the government has taken several initiatives to preserve the environs of known resorts besides developing new tourist spots, in the Valley.

He said efforts are on to bring Aharabal, Doodpathri, Bungus Valley, Wullar-Mansbal lakes, Gurez, Kokernag and Yousmerg like  serene spots on tourism map for which several Development Authorities have been set up to create basic infrastructure for convenience of the tourists. These efforts would also take care of the sustainable tourism development in the State. He said to safeguard the rich environs and for restoring pristine glory of famous Dal lake, necessary steps have been taken up by the Government in this regard.

Jora said that the tourism especially in and Ladakh is cutting edge for the economy of the State, adding that the government has taken several measures for its sustainable development. He said eco-friendly guest houses, besides other infrastructure is being also set up under private sector in Ladakh and other areas of the State. The State government is providing subsidy and other logical support for the purpose he added.

The Minister complemented Central government for its support for sustainable tourism development in the State. He said by the liberal funding from Centre, the State government has to a great extent succeeded in creating tourist infrastructure at the tourist destinations.

President Green Tech,  Kamaleshwar Sharan in his address gave detailed resume of the activities of his Association taken for sustainable preservation of the environment in the country.

Earlier, the Minister inaugurated the conference by lighting the traditional lamp.

On the occasion, the President Green tech honoured  Jora by offering a memento to him.