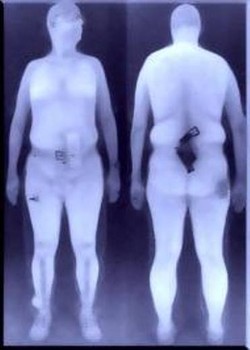 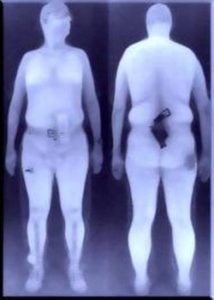 Imaging scan at airport meant to detect weapons – but they can’t detect butt bombs, surgically implanted into the rear end of a terrorist hell bent on blowing up a commercial airliner.

The US is worried about a new type of would be bomber.

Not only is this one possibly wearing hard to detect “underwear” bombs but in some cases he (or she) is sporting surgically implanted “butt bombs”, using a type of explosive compound called “Pentaerythritol tetranitrite” (or PETN) that could be detonated via an injection.

Remember these are devices which are literally surgically implanted by doctors inside the bodies of people which makes it a nightmare to detect at airports.

It reminds me of a scene in the movie “Dark Knight” where the Joker managed to surgically implant a bomb in the belly of a prisoner at the Gothom city jail (see: http://www.youtube.com/watch?v=0VRA5XPzSP0).

These latest non-metallic bomb would not set off traditional metal detectors, but could be discovered by body scanners and more thorough security checks. However not all US airports are equipped with body scanners, which means that gaping holes exist throughout the system which bombers can slip through .

We contacted the Transportation Service Administration (TSA) who refused to comment on this issue and instead transferred me to officials who make inquires about who I was and why I was inquiring about this subject.

I was later called by the Department of Homeland Security officials who indicated that my information was correct in terms of there not being enough body scanners to address this particular threat. One reason had to do with the incredible cost of body scanners, which can range anywhere from $30,000 to $50,000 dollars a piece.

According to Wikipedia PETN is most well known as an explosive that has been around for a long time.

It is one of the most powerful high explosives (HE) known, with a relative effectiveness factor of 1.66.

PETN mixed with a plasticizer forms a type of plastic explosive called Semtex. This was the type of bombs used a string of terrorist attacks, including the 2001 Shoe bomber, the 2009 Christmas Day bomb plot and the 2010 cargo bomb plot (see article: Exposing the Weakest Link: As Airline Passenger Security Tightens, Bombers Target Cargo Holds http://www.scientificamerican.com/article.cfm?id=aircraft-cargo-bomb-security ).

On 7 September 2011, a bomb suspected to have used PETN exploded near the High Court of Delhi in India claiming 13 lives and injuring more than 70 (see article: Nationwide alert as NIA takes up probehttp://www.thehindu.com/news/national/article2432945.ece?homepage=true ).

PETN is also used as a vasodilator drug to treat certain heart conditions, such as for management of angina (see: http://books.google.com/books?id=-EAxShTKfGAC&pg=PA383#v=onepage&q&f=false ).

“Now you have a situation where bombers are sewing PETN (which is like a fine white power ) into the lining of their underwear or inserting into body cavities and then possibly trying to explode them…It is hard to imagine, I know, but think on it a while and you can see all sorts of wicked ways to use this stuff, and what a nightmare this stuff can be to detect” said one private security expert.

THE HEAT IS ON!

Currently the hunt is on for the Yemeni based bomb builder and the CIA is scrambling to find and assassinate this particular individual.

There is only one problem says experts who I talked with – the skill set needed for building such bombs is what they call “transferable” from one person to the next.

“Even if you succeed in killing this one bomb maker, (identified as Hassan al-Asiri”) they knowledge is still out there for others to use”, said one analyst. “So you can never really deal with it by just killing a few people or a few hundred people”, he said.

In doing this report I have come to appreciate a little more the deep frustration and fear of people in the TSA and other government agencies who are having many “sleepless nights” trying to figure out how to deal with this problem.

Even if you had all the money you need for body scanners at every single airport in the US and was able to subject every individual airline passenger to body scanning – you still have the threat of PETN being smuggled onboard aircraft in small packages by airline employees and maintenance workers, inside luggage, and a thousand other ways.