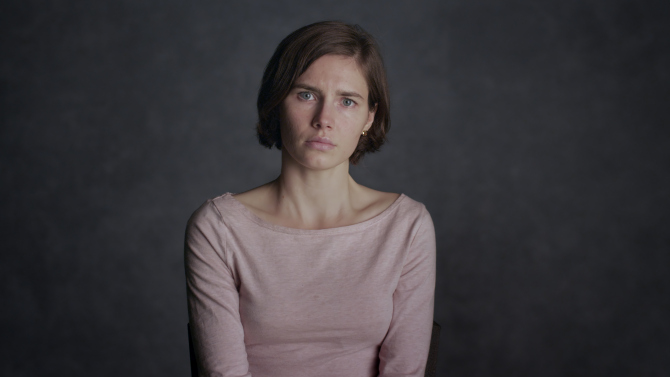 Netflix has released two new trailers for its original documentary ”Amanda Knox,” which is set to debut on September 30. The two conflicting trailers titled, “Believer Her” and  “Suspect Her”, are designed to encourage viewers to choose between guilt or innocence.

It all started back in November 2007, when Meredith Kercher was murdered in a hilltop cottage in Perugia, Italy. In a series of missteps, police initially arrested a slightly different trio than the three who would eventually be charged for the crime. The arrests came shortly after an all-night coercive interrogation session with Amanda Knox that produced faulty information, as coercive interrogations often do. Details from the interrogation would later be deemed inadmissible but the damage was already done.

On November 6, 2007, Amanda Knox, Raffaele Sollecito, and Patrick Lumumba were taken into custody. The prosecution put forth a wild theory of a sex game gone wrong committed by three perpetrators, declaring “case closed,” before any forensic analysis had been completed.

When crime scene evidence came back pointing solely to another man, Rudy Guede, the authorities squandered an opportunity to correct their hasty arrests which were based on nothing more than a rush to judgment. Instead, in an attempt to save face, they simply removed Lumumba from their theory and plugged in Guede.

From that point on, authorities would work tirelessly attempting to build a case against Knox and Sollecito. Their misguided efforts led to one of the greatest miscarriages of justice witnessed in modern history.

On March 27, 2015, Amanda Knox and Raffaele Sollecito were fully exonerated by the Italian Supreme Court, after enduring over seven years of pain and suffering. The high court finally put an end to their nightmare, giving them both a new lease on life.

Netflix is the latest network to explore the story of Amanda Knox. As mentioned above, the trailers suggest that they are asking the audience to pick a side, but I suspect that the documentary will set out to tell the truth once and for all about this case. If my hunch is correct, the side of innocence will be the only logical conclusion to be had.

In the “Suspect her” trailer, Amanda tells the audience: “Either I’m a psychopath in sheep’s clothing, or I am you.” Those who know Amanda and her family are well aware of the fact that Amanda was just an ordinary student from Seattle who got caught up in a seemingly never-ending nightmare. Her family was a typical American family, much like mine, and likely much like yours. They too were swept into a nightmare. Their story could have easily been your family’s story. Amanda’s story could have easily been your story or the story of your child.

The Amanda Knox and Raffaele Sollecito case was an Injustice Anywhere Featured Case. We are thankful that they have now been exonerated and set free. Unfortunately, many more innocent people continue to fight for their freedom from prison cells every day.  It is imperative for your livelihood and the livelihood of your family to educate yourself on the topic of wrongful convictions. Death Row exoneree Debra Milke summed it up well when speaking about her ordeal in a press conference after her release, when she said: “This could happen to any one of you. If you don’t believe it could happen, you are either misinformed or in a state of deep denial.”

Please visit AmandaKnoxCase.com and InjusticeinPerugia.org to learn more about the Amanda Knox case.