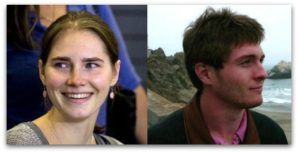 A groundbreaking new website has now come to the forefront that fully exposes a deceptive campaign of misinformation designed to mislead the media and public about the Meredith Kercher case.

Meredith Kercher was a college student murdered on November 1, 2007, in Perugia, Italy. Three people were tried and convicted for the murder, Amanda Knox, Raffaele Sollecito, and Rudy Guede. Knox and Sollecito were exonerated on appeal on October 3, 2011. Guede’s conviction and lenient 16 year sentence was confirmed by the Italian Supreme Court. Sadly, Guede is already eligible for day release for work and school.

In March of 2013, the Italian Supreme Court overturned the acquittals of Knox and Sollecito and ordered the case back to the appellate level. In January of 2014, the appeals court in Florence reinstated the guilty verdicts for both. The court has ninety days from the date of the ruling to release a motivation document explaining their ruling. An appeal of the guilty verdicts will then be heard by the Italian Supreme Court.

A deceptive Wikipedia style website was created in 2013 that egregiously misrepresents the facts about the Meredith Kercher murder case in a blatant attempt to smear Amanda Knox and Raffaele Sollecito. The misleading site was designed by an obsessed anonymous anti-Amanda Knox blogger using the alias “Edward McCall.” The misleading pro-guilt website can be found at “themurderofmeredithkercher.com.”

The pro-guilt wiki’s use of the Wikipedia format completely masks the true intentions of the website. The group operating the pro-guilt wiki openly advocates against Amanda Knox and Raffaele Sollecito on 3 different cult-like hate sites, while making absolutely no mention of it on their wiki project.

Those that have read my articles on this case over the past few years are aware that I am an advocate for Amanda Knox and Raffaele Sollecito. I am the executive director of Injustice Anywhere, an organization working to correct wrongful convictions. Our organization operates injusticeinperugia.org, a website that advocates for Amanda Knox and Raffaele Sollecito. Unlike the pro-guilt wiki, our advocacy is clear as soon as you open the homepage to our website.

Members of the Injustice Anywhere discussion forum were disgusted to see the media misrepresenting the facts of the case by incorporating information from the pro-guilt wiki into their newscasts, and knew they needed to inform the public about the  campaign of misinformation being led by enemies of Amanda Knox.

This led to the creation of www.murderofmeredithkercher.com. The website’s authors originally set out to highlight the falsehoods presented on the pro-guilt wiki, and that is exactly what they did. The site details the pro-guilt lies, followed by corrections backed by evidence.

But the Injustice Anywhere authors were just getting started. As the site continues to evolve, it not only works to refute the lies surrounding this case, it has also become a vital source of information, detailing every aspect of the Meredith Kercher case.

MurderofMeredithKercher.com provides original court documents and expert presentations that were presented in court. The site provide translations completed by volunteers and welcomes reviews on those translations by others looking to translate the original documents that are provided on the site.

Injustice Anywhere knows this is a controversial case. We ask that readers looking for information on the case do so with an open mind, and do everything possible to find credible sources that are able to provide evidence and expert opinions to back their claims. We are hopeful that the media will put in the extra effort needed to properly research their sources before using information from non-credible sources.  Of course we do not expect the media to blindly use the information we provide. We do expect the media to properly research on the topics they cover. It is never acceptable for the media to look to a group that openly acknowledges their hatred for Amanda Knox when gathering information for their news reports.

The Truth About the Pro-Guilt Wiki

The pro-guilt wiki utilizes the same template as Wikipedia.com, a freeware template offered by MediaWiki. This format gives casual readers a sense of security, as most have no idea that the template is available for all to use. The case article on the actual Wikipedia site was hijacked very early on by a small group of biased agenda editors who wrote and imposed a one sided article for years by skilful abuse and manipulation of the editing rules. Wikipedia founder, Jimbo Wales, finally stepped in and commented that there was a systematic exclusion of reliable sources and asked for the article to be rewritten. For his efforts, he was lambasted, mocked and ridiculed by the small but noisy Amanda Knox hate group. After the article was restored and the editors removed, the new deceptive wiki was created in an attempt to misinform the public and journalists.

The pro-guilt wiki neglects to inform readers that its authors are regular contributors on Perugia Murder File (PMF), an anti-Amanda Knox hate site. PMF has now split (.org and .net) because the original leaders could not get along. The activities of the anti-Knox hate group have been well documented. Author Nina Burleigh reported on the group in an article entitled: “The Amanda Knox Haters Society: How They Learned to Hate Me Too.” Author Douglas Preston wrote about the group in his recent Amazon Single “Trial By Fury: Internet Savagery and the Amanda Knox Case.” And I wrote about the group in my book “Finding Justice in Perugia.” You can read the complete chapter here.

The hatred for Amanda Knox and Raffaele Sollecito can be seen every day coming from the pro-guilt group. It does not get any clearer than a recent post made by a PMF member after visiting Amanda Knox’s new website amandaknox.com. The poster wrote:

“Okay, I looked at the “in memory” page. There are no words for the disgust I feel for the waste of flesh that is KNOX. GO TO YOUR OWN CIRCLE OF HELL, BITCH. I hate KNOX. I don’t hate many people, but for her, I make an exception for.”

The head administrator of the pro-guilt wiki “Edward McCall” makes his feelings for Amanda Knox, her friends, and her supporters, very clear while posting on both PMF websites. Here he voices his opinion about Knox while mocking her best friend in this excerpt:

“Knox is an oblivious narcissist so she has and always will have trouble making friends. Look at Knox’s best friend and you have a human troll.”

The pro-guilt wiki leader goes on to give his analysis of Amanda Knox’s supporters:

He goes on to conclude that a majority of Amanda Knox supporters are crazy stupid racist homophobes:

“I will say that unlike the Groupies (Knox supporters) you won’t find anything I have posted that is damaging because unlike the majority of the Groupies I’m not a racist or homophobe. I’m also not crazy or stupid.”

Before calling Amanda Knox supporters crazy, the pro-guilt blogger should probably take a closer look at his top editor, Ergon. Ergon’s real name is Naseer Ahmad. When not moderating his hate forum (PMF.net) and editing the pro-guilt wiki, he spends his time leading his disciples (as he likes to call them) on his blog, “Man from Atlan.” You see, Naseer believes he is God. In fact, he boldly proclaims himself to be “the Messiah Jesus Christ.”  You can read more about Ergon here.

The pro-guilt wiki is highly disingenuous with its readers by only presenting an extreme view of the prosecution’s case, with no acknowledgment of that fact. In fact, the pro-guilt wiki goes even further by fabricating claims that the prosecution has never alleged. For example, the wiki claims that Knox and Sollecito returned to the cottage, undressed Meredith and staged Rudy Guede’s sexual assault. The wiki cites TrueJustice.org (TJMK), a tabloid style conspiracy theory blog run by Peter Quennell, as its source for the false claim.

Judge Giancarlo Massei presided over the first trial, which led to the wrongful conviction of Amanda Knox and Raffaele Sollecito. Judge Claudio Pratillo Hellmann looked at the same evidence on appeal and came to different conclusions. If the pro-guilt wiki was an objective source, it would detail the Hellmann report in the same fashion as Massei, by translating defense witness testimony instead of offering fabricated summaries and by also providing the English translation of the Conti-Vecchiotti report that was written by independent experts appointed by the Hellmann court.

MurderofMeredithKercher.com details how the pro-guilt wiki blatantly distorts and twists the evidence by providing their readers with deceptive translations of documents, and intentionally misrepresenting witness statements. Knox and Sollecito supporters are hopeful that the media will not continue to be misled by the pro-guilt misinformation campaign as the Florence court is preparing to release its explanation for the current verdicts against Amanda Knox and Raffaele Sollecito, expected around the end of April.

Much has been written about what is known around the world as “The Amanda Knox Case.” A lot of this has been based on inaccurate information, innuendo substituted as facts, and at times, outright lies. Some say this case is a mystery, but if you learn the real facts, it is not mysterious at all. The evidence in the case clearly points to the perpetrator, Rudy Guede, a man who admits to being present at the crime scene at the time of the murder, and has been convicted and jailed for the crime.

The real mystery is: Why do Italian authorities continue to try to convict Amanda Knox and Raffaele Sollecito, when they have already found and convicted the true killer? When the evidence against them is extremely weak/non-existent? We invite you to read on, review the case in detail, and decide for yourself.

Visit MurderOfMeredithKercher.com for more information about this compelling case.