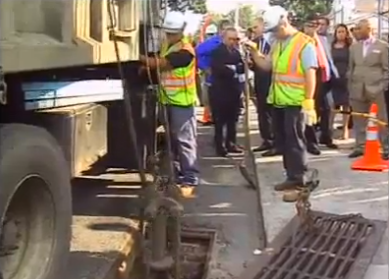 As hurricane Irene moves up the east coast it looks like New York City is well prepared. Shutting down the public transit system and stopping flights at the region’s five major airports is an excellent precaution and should not be viewed as an over reaction even though the storm has been downgraded to Category 1. If you think the downgrade means there is no danger then think again. The classification has no relationship to the likelihood or severity of tornadoes, wave surges, or flooding.

Besides halting public transportation other precautions can be seen taking place throughout the city. Windows are being boarded up and sandbags are being put in place where water is expected to surge. 300,000 residents have been ordered to evacuate from high flood risk areas and are doing so in an orderly fashion. Several nursing homes and as many as 5 hospitals have also evacuated due to fear of flooding.

Mayor Michael Bloomberg has urged residents in low lying areas to get out: "Staying behind is dangerous, staying behind is foolish, and it’s against the law, and we urge everyone in the evacuation zones not to wait until gale-force winds," he said at a news conference from Coney Island. "The time to leave is right now."

Bloomberg also added: "Irene likely will be a Category 1 hurricane when it reaches the city but it will bring high winds and 8 to 12 inches of rain"

The storm is being closely monitored and additional precautions such as closing bridges and tunnels will be enforced if necessary. Plans are already in place to deal with the aftermath of Irene. Governor Andrew Cuomo called out the National Guard, providing more than 900 soldiers and 100 vehicles to assist in rescue and recovery knowing that some New Yorker’s are stubborn and will not evacuate despite plenty of advance warning. Clean up is expected to be a daunting task and city crews are on full alert.

Some areas will remain highly vulnerable despite advanced warning. New construction is always in danger and it is recommended that you keep a far distance from any construction during the storm. World Trade Center Construction is especially vulnerable. All cranes and scaffolding have been removed but the building itself remains a target. There is danger of death or injury from flying glass and construction materials near all construction sites so please keep a safe distance.

In an interesting note, the New York Mercantile Exchange reported that there would be no danger to their computer servers because they are actually located in Aurora, IL, a Chicago suburb.

Please listen to the warnings and evacuate from all evacuation zones. Keep informed with Irene updates at www.accuweather.com.