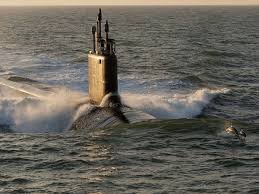 On October 10, 2014 Secretary of the Navy Ray Mabus hosted a ship-naming ceremony today to announce that SSN 793, a Virginia-class attack submarine, will bear the name USS Oregon.

During a ceremony held at the Battleship Oregon Memorial in Tom McCall Waterfront Park, Mabus announced the submarine will be named to honor the long-standing history its namesake state has had with the Navy. Mabus also recognized USS Portland (LPD 27) which he named last year in honor of Oregon’s largest city.
“Sailors and Marines, like the citizens of Oregon throughout history, are pioneers. They are explorers who are looking willingly toward the unknown, wanting to know what is out over the horizon,” said Mabus. “As we sail deeper into the 21st century, it is time for another USS Portland and another USS Oregon; time to keep those storied names alive in our Navy and Marine Corps.”
Mabus told the crowd SSN 793 will be the third naval ship to bear the name Oregon. The first was a brig largely used for exploration prior to the Civil War. The second was a battleship (BB-3) best known for its roles in the Spanish American War, where it helped destroy Admiral Cervera’s fleet, and in the Philippine-American War, where it performed blockade duty in Manila Bay and off Lingayen Gulf, served as a station ship, and aided in the capture of Vigan.
“Oregon holds a special place in the heart the Navy not just because of its long history here, but also because of shared values, those of environmental consciousness, community and heritage,” Mabus said. “From our Navy and Marine Corps units who visit for the Rose Festival every year, to the former sailors and Marines who make their homes here and carry on as community leaders and citizens. The partnership between Oregon and our Navy and Marine Corps is strong.”

These next-generation attack submarines provide the Navy with the capabilities required to maintain the nation’s undersea supremacy well into the 21st century. They will have enhanced stealth, sophisticated surveillance capabilities, and special warfare enhancements that will enable them to meet the Navy’s multi-mission requirements.
These submarines will have the capability to attack targets ashore with highly accurate Tomahawk cruise missiles and conduct covert long-term surveillance of land areas, littoral waters or other sea-based forces. Other missions include anti-submarine and anti-ship warfare; mine delivery and minefield mapping. They are also designed for special forces delivery and support.
Each Virginia-class submarine weighs 7,800 tons, is 377 feet in length, has a beam of 34 feet, and can operate at more than 25 knots submerged. It is built with a reactor plant that will not require refueling during the planned life of the ship, reducing lifecycle costs while increasing underway time. The submarine will be built in partnership between General Dynamics Electric Boat and Huntington Ingalls Industries – Newport News Shipbuilding and will be delivered by Electric Boat in Groton, Connecticut.
USS Portland will be a San Antonio-class landing platform dock. It will support amphibious assault, special operations, or expeditionary warfare missions by transporting and landing Marines, their equipment and supplies by conventional aircraft, helicopter or vertical take off and landing aircraft.
The LPD is being constructed by Huntington Ingalls Industries. It will be 684 feet in length, have a beam length of 105 feet and will be capable of operating at 22 knots. Media may direct queries to the Navy Office of Information at 703-697-5342. For more news from secretary of the Navy public affairs, visit http://www.navy.mil/SECNAV.

For more information about the Virginia-class attack submarine, visit http://www.navy.mil/navydata/fact_display.asp?cid=4100&tid=100&ct=4.

Filed under: Military, News
Share Tweet Pin G Plus Email
previous article: US Navy will commission its newest amphibious assault ship, USS America on Saturday October 11, 2014
next article: Mexican Army one of the most efficient and cost effective in the world in terms of its size