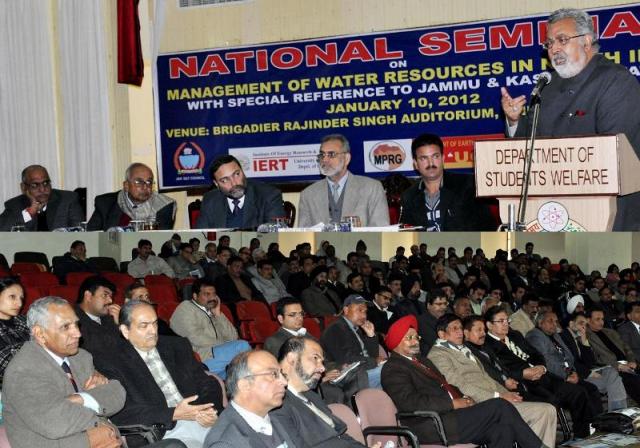 , January 10 (Scoop News) –  “The NHPC in J&K was never given ownership of power projects as per the provisions of law except their execution, operation and maintenance. Even the agency status given to the corporation expired in 1987. Therefore, these projects actually belong to the State. However, a cabinet subcommittee has recommended for payment to the corporation for taking over Uri and Salal projects which will enable J&K to become not only self sufficient in power but also export it to other States and strengthen our economy to stand on our own legs,” said Minister for PHE, Irrigation & Flood Control,  Taj Mohi ud Din today.

Delivering the key note address at a national seminar, ‘Management of Water Resources in North India’, at Jammu University this morning, the Minister said the agreements J&K government signed with the centre from time to time gave the corporation rights to the extent of execution, operation and maintenance of power projects in the State but not the ownership rights.

The Minister said the government has constituted a cabinet subcommittee which is examining the issue. He said the Government intends to buy back Uri and Salal hydel projects on the depreciated value which can make J&K a surplus in power generation.

Giving a resume of activities undertaken by his Departments to consolidate water resources in J&K,  Taj enumerated several steps taken on this count. He said for the first time in 60 years a legislation (J&K Water Resources Act-2010) was passed aimed at consolidating water resources in J&K. He said more than Rs. 900 crore would be realized as water usage charges this year which forms 30%   of State’s total revenue.

The Minister said the Government has initiated the process to construct the remaining portion of canal in Kathua district which would irrigate more than 1.33 lakh acres in three districts and help add   2.66 lakh metric tons to the existing food grain production.

Speaking on the subject, Prof Verghese stressed on gaining greater understanding on the subject. He suggested taking some innovative measures so that water resources in the region are consolidated to harness for future generations.

Prof. Varun Sahni, in his address underlined the need for protecting and safeguarding water resources as there is no technological replacement for the same.

In the second session,  A. R. Makru, Dr. R. K. Gupta and Prof. B. Thussu addressed the seminar.

Head of the Department, Geology Prof. G. M. Bhat appraised the gathering of experts that the aim of organizing the national seminar is to high light problems being faced by the people in absence of better utilization of the water resources and highlight the ways and means for the conservation of the same.   Prof. Bhat insisted that the state needs to look forward to find long lasting solutions to the problems faced to it.

He hoped that the presentations by experts will help in obtaining suggestions to remove bottlenecks in functioning of institutions related to water resources management .

Later, a brain storming question answer session was held in which Tejwant Singh Reen and other eminent persons participated.

Minister for PHE  Taj Mohi-ud-Din replied to the queries.

Earlier, in his welcome address,  Bashir Assad sought support from civil society groups and government for preserving the state’s water resources. He underlined the need for creating mass awareness about the importance of conservation of water resources.