With a background in cityscape photography, Olamide Oladimeji, is carving a niche for himself as a cinematographer. Olamide graduated with his Bachelor’s degree from Nigeria’s prestigious University of Lagos, while in the university he was nominated for several photo 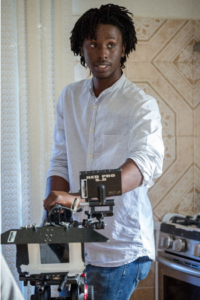 graphy awards and was employed by NGO RCCG City of David to shoot documentaries.

The new terrain of documentaries opened his eyes to the world of filmmaking therefore leading him to move to the United States to study cinematography at the New York Film Academy which he describes as “amazing experience, understanding how one person with the collaboration of others can elicit emotions, actions and reactions with light, colors and perspective”.

Having graduated from his diploma program, Olamide has gone on to work on several projects as a cinematographer, and most of them have been nationally and internationally accepted. In a short working professionally, Olamide’s projects

have been screened in the some of the world’s biggest film festivals like Cannes Film Festival, Hollywood Reel Independent Film Festival, California’s Women Film Festival, and also nominated and won awards around the world too. Also he has been able to work on projects with the likes of director Benny Boom, cinematographer Tommy Maddox-Upshaw, actors Terrence Howard, Jay Ellis, Snoop Dogg, to mention a few

Looking into the future, the young Lagos born cinematographer is already booked to lens an impressive list of commercials, music videos and movies in the US, Central Europe and Africa even till 2020, and hopefully beyond.