Earlier this Tuesday, Nissan offered an interview to the press in which it announced that it is indeed interested in bringing autonomous cars to the public and that they have already taken the required efforts to make this happen by 2020.

With this pledge, Nissan is currently the only manufacturer on the planet to take on such a challenge and promise to deliver results by a set date.

In the effort of staying on track with the project and making sure that the deadline will be met, Nissan has started collaborating with very popular universities, with some of them including the University of Tokyo, Carnegie Mellon, Oxford, Stanford and MIT on the technology which will forever revolutionize the way people think of cars.

In Japan preparations have already been made for creating a special track that was even reported to feature “real townscapes”.

In the meantime, a very important even is going to take place today in California, more specifically Irvine, where Nissan will demonstrate what their electrical outfitted vehicle called the “Leaf”, is capable of.

Not only it’s equipped with advanced actuators, A.I. and laser scanners, but also all round video monitors. Article about Leaf (including video, courtesy of Klosters).

Making a pledge that it would create a fully autonomous vehicle is something of massive importance for Nissan’s reputation and also credibility, but it seems that the manufacturer is quite aware of what the challenge involves and it’s incredibly sure it will deliver on its words. On top of that, Nissan aims at coming up with an autonomous vehicle that’s also within the budget of the average consumer, which is yet another important milestone to be accomplished.

In total, there will be 2 generations of the car, with both of them having similarities and distinct features. Analysts believe that the 2 generations signify the company’s focus on the lower and upper consumer class.

Nissan’s CEO, Carlos Ghosn, stated in an early interview that in 2007 Nissan pledge it would come up with a vehicle that has 0 emissions and soon enough, the Leaf materialized as the offspring of that promise.

It’s not only the company’s best-selling car by now, but also the best-selling vehicle in history. Today, Nissan made another pledge, promising that 7 years from now it would revolutionize the auto industry with a technology they call “Autonomous Drive“.

At the Consumers Electronics Show (CES) that took place earlier this year, there was a number of other vehicle manufacturers that were interested in making a self-driving car, with some of the major ones being Audi and Toyota.

Even better, Audi may even have a date for when it’ll start mass production for these vehicles, so it would be pretty interesting to eavesdrop on the internal board meetings of the said car manufacturers.

What consumers need to keep in mind is that the autonomous drive technology from Japanese car manufacturer Nissan, is actually an extension of Safety Shield. Safety Shield is basically a system that deals with the monitoring of a 360 degree view around the vehicle.

When the driver is not paying attention on the road, it will warn him about it and if the driver still doesn’t take action, the car will take action on its own.

Safety Shield is currently integrated in the luxury division from Nissan, called Infinity. The technology it uses is so advanced, that it practically allows the 2014 Q50 Infinity to drive itself on the highway.

The vehicle also comes with ACC or adaptive cruise control, which is a system that’ll ensure the car keeps a safe distance from the vehicle ahead and adapt the distance if the latter or the car in front of it, slows down.

While it may be surprising for many, Google is currently the most popular candidate for releasing driverless cars. The company has tested such cars in the last few years in Nevada and because of that, companies like Nissan and the rest may have some solid competition to face up to in the future.

Rumors say that Google works hard on being the first to launch one such car and it doesn’t want to only modify existing vehicles as it did in the past, but actually design an entirely new one. As for partnerships, Google attracted no one in the game and is forced to take on this challenge alone.

However, the software giant is reportedly in talks with different manufacturers so that it will manage building vehicles to its own specifications and designs. At the moment, there is no information whether these goals will be achieved or not. 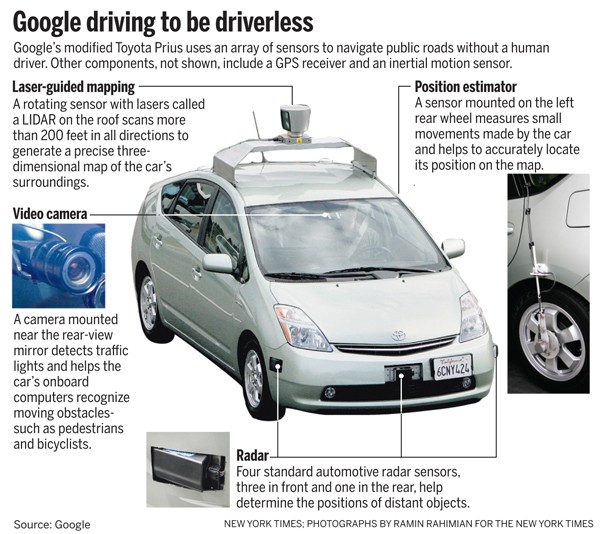 Efrati reports though have confirmed that Google is initially going to offer such vehicles as robo cabs. These cabs will be part of an entire taxi fleet programmed to pick up customers on demand.

There is a possibility that this will happen and this thought is enforced by Google’s investment in taxi company Uber. In the beginning, human drivers will have to be present for safety concerns, but eventually, they will be required no more.

In terms of price, the cars may be very expensive, with reports saying that Google is thinking about an asking price of 150.000 dollars, but that could be the biggest advantage for its newly and indirectly announced competitor, Nissan.

Because it announced there would be 2 driverless car generations, it does imply with more than 90% accuracy that it will have at least one very affordable driverless vehicle for sale.

With the way things are developing and the great interest that’s being shown in driverless cars by 2 of the biggest companies in the world, watching the way things evolve is extremely interesting. Nissan may be the smart one here, because it has pledged that in 7 years it will come up with a driverless car.

This means that it wants to take its time, but on the other hand, Google may see an earlier release for their vehicle, but given their fast paced approach, they might be forced to offer their model for a much higher price. Tension is rising and many steps are being taken in multiple directions, so closely watching each of these undeclared competitors is extremely exciting.