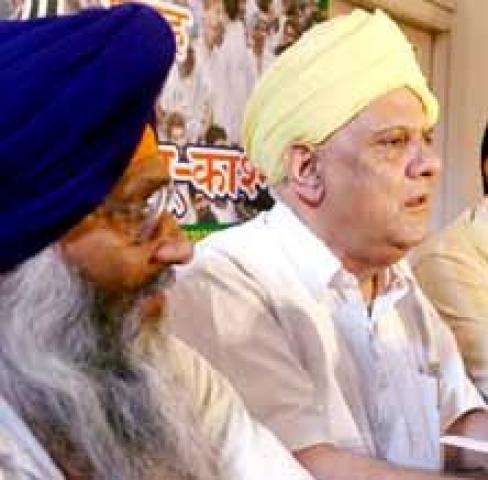 , June 04  – “who says there is no Nizam-e-Mustafa (Islamic Adminstration) in ? Nizam-e-Muztafa is very much in place”.This was stated here today by BJP State President Ashok Khajuria while addressing press conference in on Thuresday.

He said, “The deliberate attack on the sikh community yesterday at Rangrath in Budgam in Kashmir, the wholesale migration of all non-muslims from Kashmir are the two glaring instances which serve to establish that Kashmiri communalists and separatists do not want any non-Muslim in Kashmir and that they want a system which is exclusive in nature and character.”

Khaujria said, that “as if this was not enough to give an Islamic orientation to the valley, the new Congress-NC alliance has stepped up its activities to purge the non-Muslims from all the decision making bodies and reduce the non-Muslim minorities in the state to a nullity for all practical purposes.”

To make his piont clear Ashok Khajuria referred to the post poll arrangement between the Congress and the NC that empowers the NC to rule the state for all six years and establish Kashmiri strangle-hold over Jammu, little representation to the Hindus in the state cabinet, exclusion of Hindus from the Rajya Sabha and Legislative Council elections and the non-inclusion of Jammu elected Lok Sabha Members into the union council of ministers. He said all these instances show that the non-Muslim minorities in the state in general and Hindus of Jammu in particular, have no place whatsoever in the ’s and ’s scheme of things and that the prevailing system is nothing but a system of Kashmiris, for Kashmiris and by Kashmiris.

He appealed all the political parties of and Jammuites to form a common platform so that the minorities in the state are protected and a proper share for them in the govenrment is ensured.

Ashok Khajuria condemned the attitude of the administration for not allowing him to proceed to to have on the spot assessment of the situation arising out of yesterday’s incident at Rangreth. Pertinent to mention here that the BJP chief, alongwith state Vice-president Rajesh Gupta, who had boarded Indian Airlines flight today afternoon were taken out of the Plane from their seats bearing No. 4-C and 4-D.

Filed under: Politics, World
Share Tweet Pin G Plus Email
previous article: ‘Govt Will not rest till truth behind their death dug out’: CM
next article: Leno Passes Torch to Conan