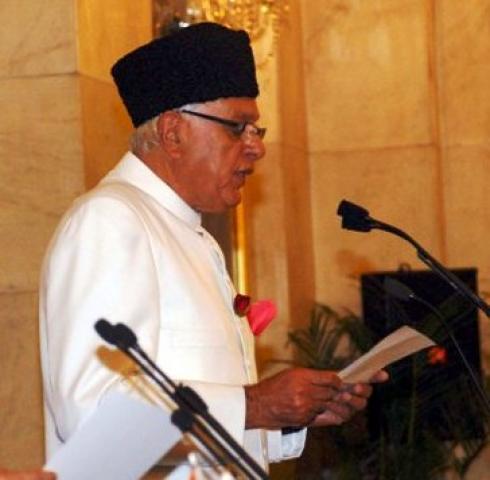 New Delhi/Jammu, March 12 (Scoop News) –Dr. Farooq Abdullah, President J&K Cricket Association have said that certain news channels are carrying the news that he authorized a loan to Ahsan Ahmad Mirza the then treasurer of the Association.

In a statement Dr. Farooq clarified that when the accounts of the JKCA were sealed by the Court and no money was available to run the day to day affairs of the Association, Ahsan Ahmad Mirza treasurer of the Association advanced interest free loans from time to time for running of the affairs to JKCA from his own personal funds which had accumulated to Rs. 1.90 crores.

Statement said that on June 28, 2008, the JKCA unanimously resolved that the interest free loan of Rupees One Crore Ninety Lacs only raised by the JKCA from Ahsan Ahmad Mirza has to be repaid. As such it was unanimously resolved by JKCA that J&K Bank branch Khanyar be authorized to raise a loan of an amount of Rs. 1.90 crores against two cash certificates of JKCA with the J&K Bank Air Cargo Branch bearing No. 2587618 and 2587619 amounting to Rs, 1,07,39416 each. It was further resolved that the amount of Rs. 1.90 crores so raised be transferred to Account No. 90605 of Ahsan Ahmad Mirza to liquidate the loan amount he (Ahsan Ahmad Mirza) had forwarded to the Association from time to time. The Association further resolved that the loan so raised will be liquidated by the Association.

Dr. Abdullah said it is clear that he did not authorize any loan in his individual capacity and the loan raised was on the basis of a unanimous resolution of the JKCA passed by the JKCA Governing Body and the same was done to square up the borrowings of JKCA which is all properly documented.

Dr. Abdullah further said that so far as the happenings after 2008 are concerned, the JKCA has already lodged an FIR and the J&K Police which has seized the documents will conduct a detailed investigation and the law shall take its own course. He said whosoever is found guilty will have to face the consequences as per law.

Dr. Abdullah said that by making preferred leaks to the media and by not putting all the facts in the public domain certain forces are trying to make an unsuccessful attempt to tarnish his image for political mileage knowing well that he is absolutely clean. He said he is open to any scrutiny for his conduct as President of the JKCA.

He said that he has also requested the BCCI to depute its auditors who can sit with the auditors of the JKCA and conduct a joint audit of the accounts to know the facts. Dr. Abdullah said that JKCA was infact the whistle blower in the case when certain facts were brought to his notice and this tirade against him was baseless and frivolous.