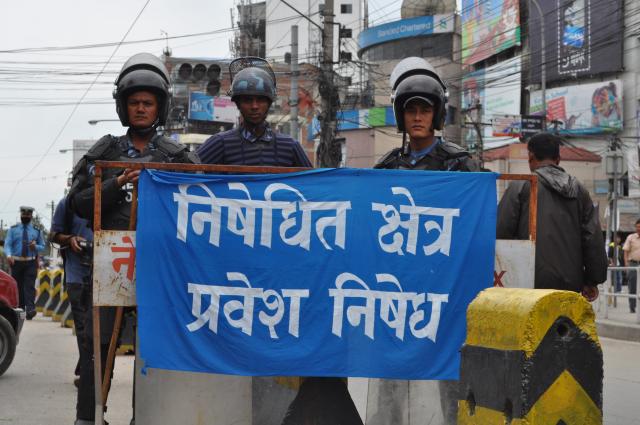 Kathmandu May 28, 2011: Nepal is currently in a dilemma and a shocked state that triangulates the position of its identity, peace and unity. People are voicing for the constitution which they have been waiting from the past 3 years which is nowhere to be found. Peoples’ patience’s and will are dyeing where their aggravation has started take the form of protest and anti slogans. Their aspirations have been significantly thought off as the first draft of the constitution which is yet to come out in public. Today is the last date for the declaration of constitution and with limited chances and lack of political solidarity; Nepal is still in a political deadlock with no option except to extend the dates for declaration.
From early morning people were seen grouping trying to protest against the current situation of no constitution. Moreover, the government declaring the Constitution Assembly (CA) area as protest restricted area certainly aggravated the normal public. So in their desperate attempt to show their aggravation people were trying to defy the government decision by protesting against the CA and government in and around the area.  The area has been well enforced with a tight security forces and barricades have been step up at different point for security purposes, as there are huge chances of scuffle and physical protest.

With the time and time after extension of the deadline for the declaration, Nepal has also seen its turn of social activism.  Recently the Come on Youth Stand up Group on 14 May 2011 brought together more than 3000 youths in support of peoples aspiration and constitution. Similarly, Nepal Unites, yet another Facebook group has been working toward the cause in a peaceful manner. Nepal Unites is the alliance of different professionals and groups to successful work and raise awareness toward the importance of constitution and political stability.

One of the protestor, Shyam Sharma who had came for the Self Arrest Campaign said, “In any democratic practice the right to protest cannot be denied. The government trying to restrict the CA area certainly shows its weakness and lack of visibility. We just want our constitution and it’s our right, the government cannot prohibit us from doing so. Reality is the CA members were well paid and were give the chance of creating a new and effective constitution but I believe they failed time after time. Now we are here to build the pressure to say that if you cannot come to a common understanding of creating the constitution then you have no rights to enjoy the benefits and to hold on to the position as CA member. We public are sick and tired of seeing your activities and we will not tolerate this.”
“We have kept our silence for too long it now time for the people to speak and we will no matter what. Time after time we gave them an opportunity to build a good nation and like always they failed. I think we need a new revolution where the old orthodox political definitions should be wiped out and only then we can imagine a better prosperous Nepal.”
The area was densely populated with people who are willing to get arrested for protesting which was organized by various organizations. “Its civilian rights to protest and when the government infiltrates it then the only option left is to get arrested, ” Kalu Pandey

After the revolution of 2008 that out-casted the autocratic  monarchy regime, the CA was formed to establish a new constitution and to work towards building a better constitution and prospect but from then lack of political trust and time after time the prolongation of date of declaration certainly made the public think for no option except to get down in streets. Apart from that the CA members getting involved in criminal and irregular activities certainly honed the topic.

According to a report published by MIREST Nepal recently that refers to the expenses made on Peace and Constitution beginning 2007 to 2010 is to the staggering tune of Nrs. 15 Billion. It should must have been more than meets the eye. Similarly, expenses made on the Maoists’ PLA (Monthly salary, food and shelter) is Nrs. 2.44 Billion during the period. Amount spent in reconstruction of physical infrastructure is Nrs. 30 Billion. For Constituent Assembly election and Constitution drafting process Nrs.13.19 billion has been spent.

To run various peace process related projects, Nrs. 8.19 Billion has been siphoned. UNMIN related expense is Nrs. 13.19 Billion and fund allocated to the Peace Fund at the Ministry of Peace and Reconstruction is Nrs. 22.24 Billion.

Praksh Lamichanne a student union activist said, “As the people they know how incompetent the constitution assembly members are they know it for sure that if the constitution could not be made in 3 years then it certainly cannot be made in 1 or 2 months. The extension is completely irreverent may be that is the reason why the public outrage toward the CA and CA members have increased so much.”
Now it’s upon the government and Constitution Assembly Members to decide what next?
If they extend the date’s people would further come out to protest against and if they don’t then their legality is questioned. The deadlock has certainly made the people believe that the country has to see another revolution out casting the current political practices and definitions. People are searching waiting for their answers with the hope of a new revolution and change..