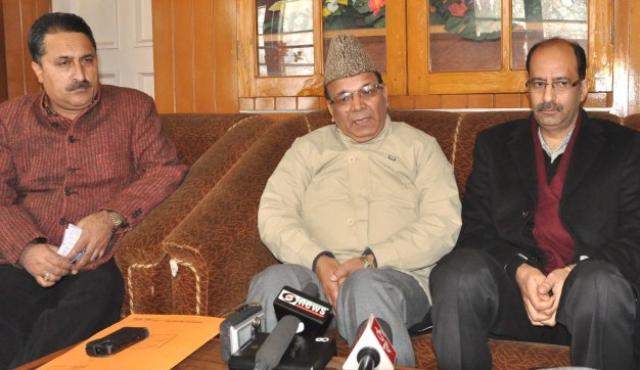 , December 31 (Scoop News) – No human or property damage was reported as a result of yesterday’s snowfall except one cowshed and two Kuthar’s in Pahalgam area, officals informed in a high level meeting  held in today.

Finance Minister,  Abdul Rahim Rather to take on spot decisions to deal with post snowfall situation. Immediately after reaching , a high level meeting of all HoDs of divisional administration, was convened here today. The meeting was attended by Minister of State for H&UD and Tourism,  Nasir Aslam Wani, Divisional Commissioner, , Dr. Asgar Samoon, IGP Kashmir,  S. M. Sahai and other senior level HoDs of Kashmir division.

The meeting was informed that the divisional and district administrations in all parts of the valley started work from mid night and cleared all important roads in the district by deploying snow clearing machines in all areas which helped in immediate restoration of traffic on roads.

Rather while appreciating the prompt response shown by the administration in dealing with the snowfall situation emphasized for remaining alert so that no inconvenience is caused to people. He directed the Mechanical Engineering department to deploy more water pumps to drain out the water from the inundated areas.

The Finance Minister advised PDD to stick to published power supply and curtailment schedule and at no stage inconvenience should be caused to the consumers due to unscheduled power cuts. He said the government is spending a huge amount of Rs. 2500 crore on the purchase of power which is Rs. 500 crore more than the budgeted allocation for the purpose. By this, he said, people shall not confront any problem on account of power supply. He said government also made gas turbine plants operational generating 40 MWs of additional power which has eased the power situation to some extent.

The PDD assured the Finance Minister that in those areas where power restoration work is underway, the power will be restored to these areas by tomorrow. However, the power supply in the and major towns has already been promptly restored.

Regarding availability of essential commodities,  A. R. Rather asked the officers that nobody should be allowed to take undue benefit of the closure of National Highway adding that flying checking squads should intensify market checking headed by concerned Deputy Commissioner’s and take stern action against those found guilty.

The Commissioner, Srinagar Municipal Corporation and Director Local Bodies, Kashmir informed the Minister about the steps taken for cleaning the lanes in and other towns of the valley besides making arrangements for draining out water from the inundated areas.

Later, he also interacted with electronic media persons and said that administration which has promptly swung into action for restoration of important roads leading to various districts and traffic movement was ensured. He said power supply was also restored, besides water supply. He said that the uninterrupted water and electricity supplies was ensured for the hospitals.  Rather said that foodgrains, petrol and petroleum products are available in all the areas, however, more essentials are being dispatched to various areas. He complimented the administration for taking prompt and timely action in dealing with the situation caused due to snowfall in the valley.