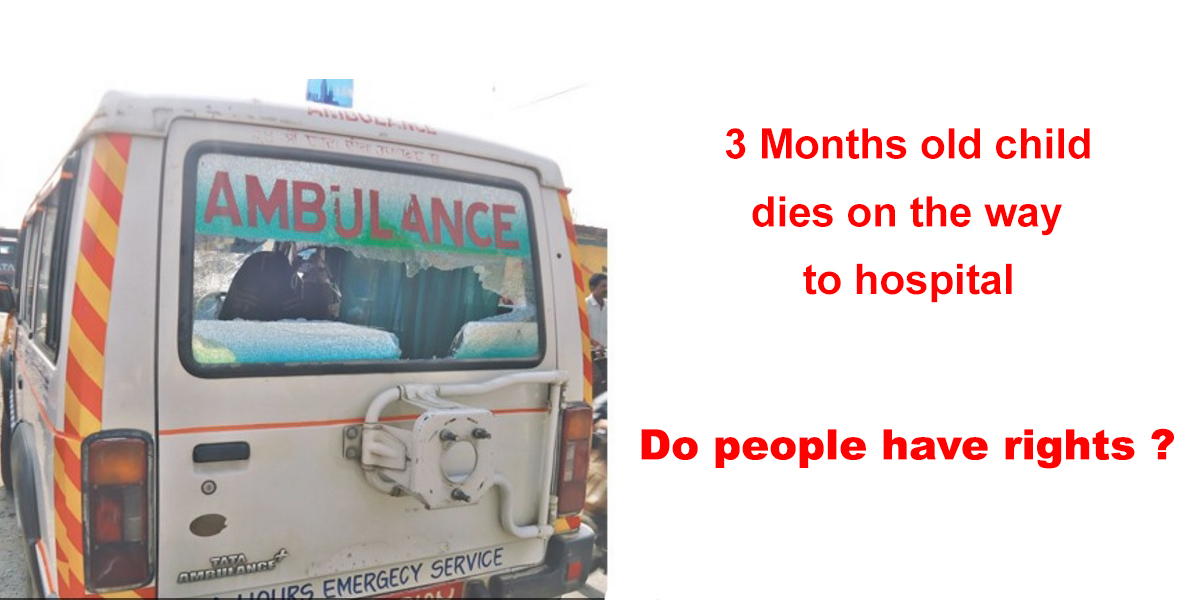 On November 23, 2015, the United Democratic Madhesi Front in Udaypur, the Madeshi protestors deny access to an emergency ambulance which boarded a 3 months old baby. The baby died on the way to the hospital where he was referred to Biratnagar after treatment was not possible at Udayapur District Hospital.
Kanitpur daily Reports, “Ambulance driver Mehabub Raj said the ambulance was stopped by protesters at three different places along the highway. It took more time due to obstructions on the road, he said, adding that the child might have survived if ‘we had managed to take him to the hospital on time. We pleaded with the protesters not to stop us and tried to explain the situation, but they refused to listen, said an aggrieved Dhan Bahadur ( father).”

The Himalayan times reports, “Dhan Bahadur claimed that the ambulance was not allowed to move even after he told the demonstrators that his son was seriously ill. Ambulance driver Mehabub Raja said he also pleaded in vain with the demonstrators to allow the vehicle to pass.”

Sajina Karki a lawyer, “Nepali people have been supporting the rightful demands of the Madhesh protest but with such killing and negativity around, things are getting out of control. By such inhuman acts of attacking sick women, children & ambulance they are proving themselves wrong. It’s a sad day for Nepal that a 3 months old child died in scuffle of politics. Humanity is something that is more than anything and establishing their own rights, they should not be violating other’s human rights and right to live.”

The madeshi People have been protesting about their rights and identity issues to be secured in the new constitution which was approved by the Constituent Assembly which came into effect on September 20, 2015, replacing the Interim Constitution of 2007. The constitution was endorsed by over 84% of the total lawmakers out of the total 598 CA members. 507 members voted in favor of the constitution while 25 voted against and 66 others did not take part in the election process.
Nepal seems to be heading towards the path of unrest and lack of political leadership where the public is facing the crunches on one hand they are bound to face the invisible blockade of India whereas on the other the Madhesi protest is taking its toll with further inhuman acts. Time will tell how much the Nepali people are able to witness this situation of chaos and crisis.