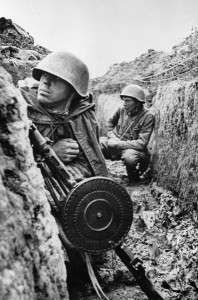 Russian troops on the front line in Leningrad during WWII.

Vladimir Putin attended a gala reception at the Grand Kremlin Palace to mark Defender of the Fatherland Day, which Russia celebrates on February 23, 2015.

The President congratulated veterans and armed forces servicemen and civilian personnel on the upcoming holiday.

“Soon, on May 9, we will celebrate the 70th anniversary of Victory over Nazism. This is a sacred date for us. It was our people and the Soviet army that made the decisive contribution to fighting Nazism.

It was the courage of our soldiers and officers in the battles for Moscow and Stalingrad, Kursk, Warsaw, Leningrad, Budapest and finally Berlin that made it possible to defeat the aggressor’s finest troops.

In the fiercest battles, our troops not only drove the Nazis from our land but went on to carry out the great liberating mission of freeing Europe from enslavement and then struck a blow against the aggressor in the Far East and sounded the victorious final note in the entire Second World War.

These are not just historical facts but the memory that lives in every Russian family, and this is our history, which we will defend from lies and from being forgotten. I am sure that those who serve in the Russian army today and those who will join the ranks in the future and serve beneath our battle banners will always look to the example of the victors and will never flinch or retreat.

Comrades, we all know well what great responsibility our armed forces and all of our security and law enforcement services bear today. They are responsible for our country’s peace, security and stable development.

No one should harbor any illusions about it being possible to achieve military supremacy over Russia or to use pressure against us in any way or form. Russia will always have an adequate response to any such reckless actions.

Our soldiers and officers have shown that they are ready to act decisively, with coordinated precision, professionalism and courage to carry out even the most difficult and novel missions, as befits a well-trained and experienced modern army that preserves its traditions and military spirit and is constantly improving and setting the highest modern standards as its benchmark.

We have done much over these last years to make our military command system more efficient and build up groups of troops in the areas of greatest strategic importance. We are successfully carrying out an ambitious program to modernize the army and navy, including active modernization of our air and space defenses and nuclear forces. This is the guarantee of global parity.

We will continue to do everything needed to ensure that the armed forces continue to build up their capability. I want to stress that we will carry out our military development plans no matter what the circumstances, and there should be no doubt about this.

The state authorities will also continue to implement the program to put in place good conditions for military service, including construction of permanent and service housing, expanding the medical and social services system, and developing modern garrisons.

Friends, let me congratulate you on the upcoming holiday. I want to offer my warmest congratulations to your families and loved ones, to all those who are your reliable support in your lives and your work.

I am sure that Russia’s soldiers and officers will continue to guarantee reliably our people’s peaceful life and protect our great country’s independence and national interests.

I wish you success!”