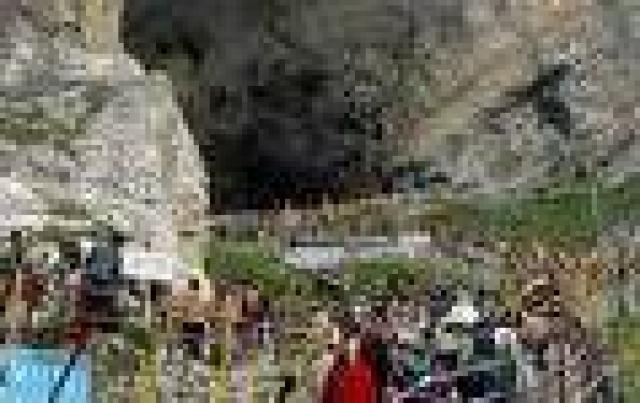 Srinagar June 20 (Scoop News) – Saugat Biswas, Additional Chief Executive Officer of the Shri Amarnathji Shrine Board (SASB) stated today that no person must embark on the Yatra without obtaining a valid Yatra Permit after due registration as per the procedure prescribed by the SASB, procured either from one of the designated J&K Bank Counters or via online through the website:http://yatra.jkbank.net

Meanwhile, Over 1.47 lakh persons have so far registered for performing this year’s Shri Amarnathji Yatra in the first 15 days of registration through the 121 designated branches of the J&K Bank across the country. The registration process had commenced on 5th June, 2010.

Sh. Saugat Biswas, Additional Chief Executive Officer of the Shri Amarnathji Shrine Board (SASB) informed that after an internal review meeting chaired by the Chairman Shrine Board, Sh. N. N. Vohra, and attended by Chief Executive Officer, Sh. Raj Kumar Goyal, and all the other concerned officers, it was agreed that the widest possible publicity must be given to the precautions to be followed by the pilgrims. The Board has issued a detailed advisory of Do’s and Don’ts for the Yatris visiting the Holy Cave Shrine of Shri Amarnathji, which are printed on the reverse of the Yatra Permit. He advised the Yatris to strictly adhere to these Do’s and Don’ts as they have to undertake an arduous trek through high mountains and would do well to prepare for the Yatra by achieving a satisfactory level of physical fitness. For this they should take regular morning/evening walks, about 4-5 km per day. With a view to improving oxygen efficiency of the body, it may be useful to start deep breathing exercises, preferably Pranayam. As the Yatra involves trekking at an altitude of 14,800 feet, the Yatris must have themselves medically examined for the journey. Every Yatri is required to self certify his medical fitness to undertake the Yatra while registering for issue of a Yatra Permit.

Sh. Biswas said that as the Yatra traverses through high mountains, facing strong winds, the Yatris need to carry adequate woolen clothing, a small umbrella (which covers the head with an elastic band around the forehead and supported by a strap around the chin), wind-cheater, raincoat, sleeping bag, waterproof shoes, torch, walking stick with a proper hand grip, cap (preferably a monkey cap), gloves, jacket, woolen socks and trousers. He added that these are essential as the climate is unpredictable and changes abruptly from sunny weather to rain or snow and the temperature may sometimes abruptly fall to 5 degree Celsius or lower. For ladies, saree is not a suitable dress for the Yatra. Salwar kameez, pant-shirt or a track-suit will be more comfortable. Keeping in view the tough nature of the trek, small children shall not be allowed to undertake the Yatra.

Before hiring a pony, dandi or a labourer the Yatri must satisfy himself that the ponywalla, the labourer or the dandiwalla is duly registered and carries an ID card. The Yatris can get do the hiring at rates fixed by the local administration, at the camps at Baltal, Nunwan (Pahalgam), Panjtarni etc. The pilgrims must take care to see that the porters and horses/ponies with their luggage move close to them as it may be difficult to trace them in case they get separated from each other. This is necessary as the Yatris may suddenly need something from their luggage. During the Yatra from Pahalgam/Baltal onwards the Yatris must keep their clothes and eatables in a suitable waterproof bag to avoid these getting wet.

The Yatris have been further advised to carry sufficient money to pay for their accommodation at Base Camps and at other halting stations enroute the and for meeting other personal requirements. To enable the Yatra authorities to take urgent necessary action in case a Yatri is involved in any emergency, the Yatris are advised to keep in their pockets a note containing the name/address/mobile telephone number of any other Yatri proceeding for Darshan on the same date and route as they are following. They must also carry their identity card/driving license and the Yatra Permit issued by the Shrine Board. Every Yatri is advised to carry all the medicines which he takes daily and, besides, some general medicines such as Glucose, Disprin, Combiflam, Move/Iodex, etc. They should also carry a water bottle, dry fruits, roasted baked grams/channa, toffees, sufficient chocolates, etc. for use during the journey. Further, the Yatris should keep some Cold Cream/Vaseline/Sun Screen with them to protect the skin from the cold winds/sun. They have also been advised to keep dark glasses/goggles handy. While trekking, they need to relax for a short while on steep inclines and not exert beyond their normal capacity.The best way to complete the Yatra trek is to maintain a slow and steady pace and not unnecessarily exhaust/tire themselves by walking fast. The Yatris must also follow the instructions issued by the Yatra Administration from time to time.

Sh. Biswas reiterated that the Yatris must respect the pristine environment and do nothing whatsoever to pollute it. Use of plastic is strictly banned, and punishable under law. The Yatris are advised to use latrines/bathrooms in the Camps established byShri Amarnathji Shrine Board. The Yatris have also been advised that cash offerings should be put only in donation boxes of the Shrine Board. They can also donate through the website of the SASB.

The Yatris have been advised not to stop at places which are marked by warning notices. They must neithersmoke nor carry/consume any kind of narcotic or alcoholic substance. They are advised not to use slippers, because there are steep rises and falls on the route to the and, as such, they must wear shoes with laces. The Yatris have also been asked not to attempt any short cuts on the route as doing so would be dangerous. They must not break traffic discipline or try to overtake others in difficult stretches of the route.

The Yatris have also been advised not to touch or place/throw anything on the Holy Lingam.

Sh. Biswas also informed that all relevant information regarding the Shri Amarnathji Yatra is available on the Board’s website “www.shriamarnathjishrine.com”. The Yatris can also seek information from the Shrine Board Control Room at 0194-2501679.

Filed under: Media & Tech, World
Share Tweet Pin G Plus Email
previous article: AIPO’s Conrence is a platform where we can learn from one another’s experiences:Meira Kumar
next article: KP community is an important component of J&K state: Agnishekhar