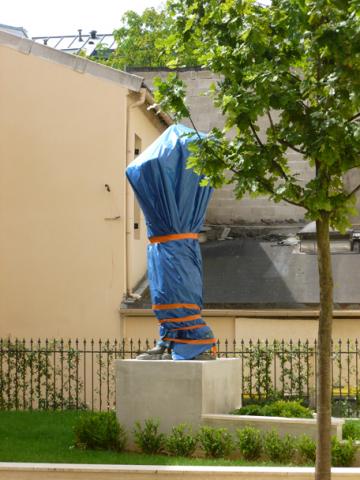 NO PILGRIMS AT THIS SHRINE

I decided to brave the August sun, on two wheels no less, and set out for Nogent Sur Marne to catch up with the most provocative new sculpture in France, a cause celebre even before its unveiling. It’s not often that a single piece of public art gets so much attention.

The journey took me through the Bois de Vicennes, which is always a pleasure, with its Chinese prostitutes on bicycles (leave it to France to innovate on the oldest profession), its fields full of amorous couples enacting a kind of decipherable semaphore of physical attachment and yes, just for kicks, a portly man wearing only a turban, standing under a small spreading tree in the shade waiting for his next customer. He stood there defiantly with legs spread and hands on his hips. I kept pedaling and didn’t inquire what service he was offering.

It was so hot that even the pigeons had plopped down in the dirt and refused to budge… By the time I got to Nogent, I was burned red and panting and would have killed for a Coca Cola. The streets were eerily quiet in the winding Italian quarter with only a straggler or two whom I could pester for directions.

Petite Italie in Nogent sur Marne takes its name from the workers who came north in the 19th century to work in the town’s fabric and feather mills, and it maintains its working class character of narrow streets perched above the langorous Marne, which seemed, in the harsh light of 3 p.m.in the afternoon, not to be moving at all.

I asked for directions and got an earful, most of it wisecracks which I half understood. Suffice it to say that everyone knew about the sculpture even if they didn’t know exactly where it was.

Jacques Martin is the town’s mayor, a member in good standing of the UMP, the populist party which ruled France for the last five years before the elections in May. He had an idea to commemorate the workers with a statue and set about the details, submitting the proposal to the City Council.

What he did not exactly disclose – memories differ – is how the statue, 80,000 Euros worth of bronze and finesse, would be paid for, nor who the model would be. Ah well, small town politics. You can’t possibly tell everyone everything, can you?

After much pedaling up and down those sunbaked, listless hills I found her: a plumassière who prepared the fancy feathers that were all the vogue back in the day. She is presently out of public view, wrapped in a blue tarp, two meters tall with only a single foot sticking out; and not, as originally planned, in a public space but in the courtyard of a new apartment building to which the gate was locked. Even the police were sitting in the shade with their feet up so there was no one to keep me from climbing over.

Official unveiling is planned for September 21. The sculptor will be there as will Monsieur Martin. But who else will attend?

The Mayor was probably wise to keep the details to himself. The model for the sculpture is none other than Carla Bruni, the wealthy ex-model and ex-first lady, who, having passed through the arms of Clapton and Jagger and innumerable others, ended up in Nicholas Sarkozy’s lap. They were France’s bling bling couple in the Elyssée, whose adventures are currently riding the best seller list in a thinly fictionalized account. One cannot say enough about them because the next five years are going to be a long hard slog of compromised socialism. (See Le Monde‘s July 16 interview with Jean-Marc Daniel for a good analysis of the choices facing François Hollande.)

Nicholas, if he ever goes on trial for his many alleged infractions, is going to be the only diversion from a less than glittering reality. Did he really accept envelopes stuffed with cash over dinner with Bettancourt, the grande dame of L’Oreal? Did Ghadafi really send him 40 or was it 50 million Euros to finance his campaign? How exactly did he afford his lavish lifestyle? These questions are being scrutinized carefully by the judges. It promises to be a good show.

This is how it works in politics. Jacques Martin had dreams of rising within the ranks of the UMP and how better to do it than to reflect the gloire of party head Sarkozy? (In fact, the sole reason for the UMP to exist at all, as their incessant, petty squabbling since his demise has shown.) No conspiracy, no directive is necessary. The minions make obeisance to a leader, or his wife, hoping a bit of it will rub off on them. And so, quite quietly, Carla Bruni became the model for a sculpture for which the public was expected to pick up the tab.

But Martin bet on the wrong pony. What had seemed a sure thing in November last was dead meat by April. And now Carla, finally and ultimately and always a foreigner as far as the French are concerned, will absorb all the rancor that should be directed at her husband. And yet she was no different than the French citizenry that voted for him: they too saw a fast horse and decided to hitch a ride. But the fury will be all hers to absorb. It is the vengeful displacement of everyday life.

The couple are currently in hiding – some say in Morocco, others in Canada – and will not be attending the unveiling. It is, however, pleasant to imagine them weathering the public reception. One can only dream of what the choleric Sarkozy’s reaction would be to that.

"And why not the Queen of England?" one of the passersby remarked with a humpf when I asked her opinion of the sculpture. Meaning of course that Carla is closer to Elizabeth than either will ever be to the common folk who must pay for their follies. And so with a phrase do we dispense with the elected royalty who rule our imagination for a few years at a stretch.