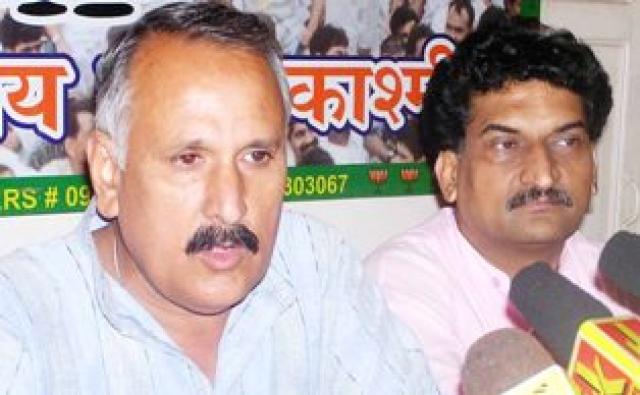 Jammu, January 15 (Scoop News) – BJP State President Shamsher Singh Manhas today said that the people still remember six year rule of BJP-NDA at the Centre as there was no price-rise, corruption free administration and number of historical projects under taken for the development of each and every part of the country.

Manhas on the occasion said that be it Praja Parishad, Jana Sangh or the BJP, our cadres have always been front runners in raising voice against and agitating over such issues which are aimed at distancing the state from rest of the country. He said that full integration of the state has always been on top agenda of the BJP and we are committed to ensure that the  separate status under Article-370 and provision of separate constitution and flag are abolish with.

He said that J&K has very peculiar identity and every now and then there are such developments which invite the attention of the world community. In such a situation, the role of BJP becomes more important as the Kashmir-centric leaders and separatists indulge in such utterances which are in no way healthy for the nation and serve to provoke the masses.

Manhas on this occasion also declared that prominent intellectual and leading Diabologists Dr. Jitendra Singh has been bestowed with the responsibility in state as Chief Spokesperson of the party. He also presented a bouquet to Dr. Singh as a mark of welcome into the party fold.

Om Prakash Kohli, while addressing the meeting, said that ours is a cadre based mass organization in which the role of each activist is of almost important. It becomes imparitive on part of our leaders to motivate, encourage and empower the activists so that we have a well trained and fully aware team. He also advised that the leader should spare time for the activists and share party’s views on important issues with them from time to time. He said that the BJP National President has set a target of 10 per cent increase in votes in next parliament elections in order to form the government at the centre and the role of our activists becomes all the more important to achieve this goal.