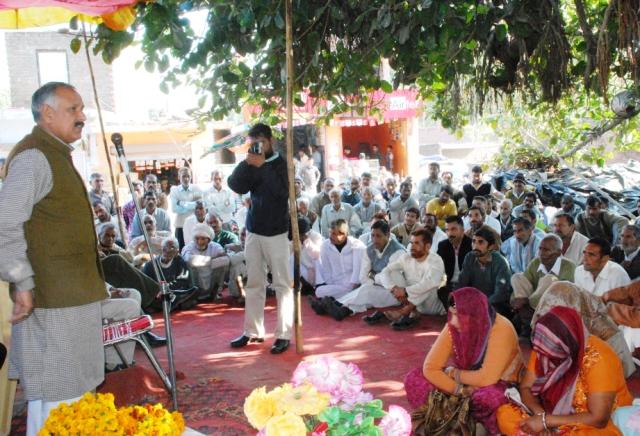 Shamsher Singh Manhas was addressing a series of separate meetings of senior leaders, state office bearers and Bharatiya Janata Yuva Morcha (BJYM) at party headquarters in on Friday. These meetings had been convened to discuss the party strategy in view of the forthcoming panchayat elecyions in the state.

He said hat we have been born for the nation and safe-guarding its interests in J&K, which is the main difference between us and parties like NC, Congress and PDP.  While for BJP, nation’s interests in the state are paramount, these parties  can go to any extent to compromise for the lust of power,  Manhas said and added that history is witness that whenever any force raised question about the state’s integeration or worked towards weakening ties with the Union of India, we were front runner in opposing any such move.

In this context, he referred to the 1953-Ek Vidhaan, Ek Nishaan, Ek Pradhaan agitation and mentioned the supreme sacrifices of tall leaders like Dr. Shyama Prasad Mookerji and said that the time has once again come when there is dire need to strengthen the nationalist forces in the state so that the votaries of autonomy, self-rule, pre-1953 position and  azadi are shown their way by building public opinion against them.

Manhas said that ours is a cadre based party and for us our party is a family of which each one of us is a member. The smooth running of a family depends on co-ordination, understanding and faith one each other, likewise, in political party too we ought to adopt same principles and responsibilities. He asked the party activists to reach the masses and expose the Congress-led UPA and the NC-Congress coalition in the state for working towards appeasing a handful of separatists and anti-national elements.