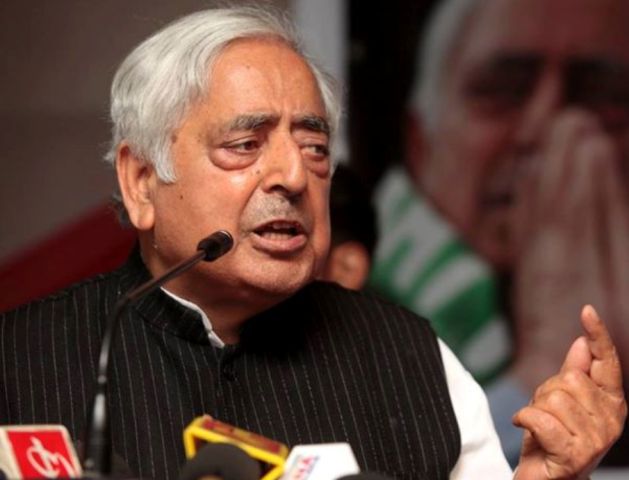 Addressing election rallies in Noorabad assembly segment in district Kulgam and Kupwara, Lolab and Langate assembly segments in district Kupwara, Mufti said Modi is staking the prestige of the high office he occupies by indulging in defamatory rhetoric for electoral gains in JK. “Unfortunately, he (Modi) is doing so without regard to facts or the perception among the people of the State,” he said and added; “It is very alarming that the prime minister of a large country like ours should be so much ill-informed about the ground realities of a sensitive state like J&K and just for adding few seats in the assembly he should sacrifice facts and promote a culture of character assassination.”

Mufti said J&K has a different experience of prime ministerial visits which have generally focused on larger picture of the region and how peace, stability and development could be ushered in. “Mr Atal Bihari Vajpayee redefined the future course by his visit to Kashmir and his cooperation with the PDP-led government but it is unfortunate that Modi inspite of swearing by the Vajpayee policy has so far observed it only in breach,” he said and added that the prime minister has to be unifying force and not the one who is seen as a source of division and confrontation.

Mufti said the issue of Jammu and Kashmir and the problems faced by its residents exist in many layers and it is only through a multidimensional inclusive approach that these can be resolved. “That is why I have spent an entire lifetime in trying to give this State a pluralistic platform that takes on board the aspirations of every region and community of this diverse state and I would do every bit to defend the interests of the State with the help of our people,” he said.

Mufti said the PDP has established a shining example of good governance in extremely challenging circumstances. “We don’t need to indulge in explaining of our conduct but it is an undeniable fact that PDP brought about a change of fundamental nature in Jammu and Kashmir which impacted the entire region,” he said and added in 2002 we didn’t face only the problems of Bijli, Sadak, Paani but for most of the people here it was the question of survival in view of repression of all kinds unleashed on them.

The PDP, he said, set new standards of development in a conflict zone which was ravaged by violence for more than a decade and established accountability and probity in public life, which many other states including the Central government are still struggling to do.

Mufti said J&K established State Accountability Commission, the equivalent of Lok Pal under a Supreme Court judge way back in 2003 while rest of the country is still struggling to setup that institution inspite of a countywide agitation for it. “Similarly J&K took a lead in establishing the RTI mechanism in 2004 which was later followed by the Centre,” he said and added it is unfortunate that these inputs are not available to Mr Modi before he makes his election speeches in JK.

Mufti said while political parties tend to go above board in their attack on opponents the Prime Minister is carried away on the basis of hearsay and wrong inputs doesn’t hold well for the country of immense diversity and dimensions that we are.

Mufti said PDP’s vision is to harness J&K’s diversity of continental proportions, from the arid deserts of Ladakh through the greenest Asian valley of Kashmir to the subtropical Jammu as a great potential for the State’s socio-economic growth.

Expressing concern over the lack of basic amenities like power supply, drinking water, road connectivity and healthcare facilities in the remote and far-flung areas of district Kupwara, Mufti said if voted to power, PDP would revive the massive developmental initiatives which were kick-started in 2002 to redress problems people are facing in these areas.