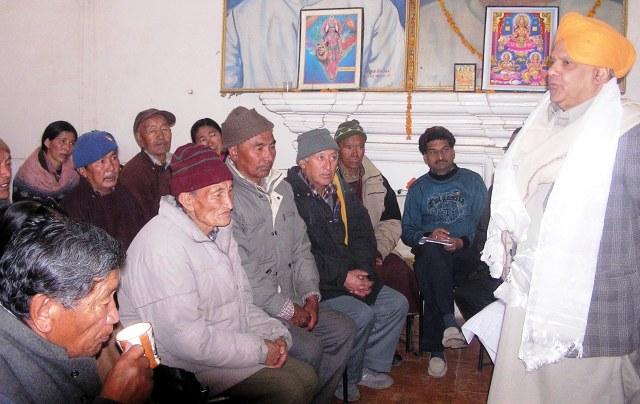 ,December 21 (Vijay Kumar)- unit of J&K President Ashok Khajuria criticized the Congress-led UPA’s policy towards , which has encouraged it to interfere in the internal matters of and declaring as a disputed territory and claiming right over Arunachal Pradesh. He said that due to the weak foreign policy of the UPA Govt, objects to construction of roads or airport in Ladakh, which is a serious matter. No sovereign nation can tolerate interference in its internal matters.

Addressing a deputation of “Himalayan Committee for Action on Tibet” from Ladakh, Ashok Khajuria said that the BJP has emotional attachment with the people of Ladakh as both, the Jammu and Ladakh,  have been facing discrimination at the hands of the successive state governments in all matters and at all spheres.

Khajuria assured them that the BJP  will leave no stone unturned in their support and will see to it that all genuine grievances  are redressed. He also asked the UPA to deal with with firm stand and convey in clear terms that and Arunachal Pradesh are the integral parts of and should respect the sovereignty of .

Earlier a deputation of “Himalayan Committee for Action on Tibet” led by its President Tashi Targis and Women Wing President Smt. Tsewang Dolma, today called on  BJP State President Ashok Khajuria at party office Jammu and apprised him of the problems being faced by Ladakhi people, particularly the discriminatory attitude towards their region by the successive governments in the state.

Members of the deputation said that it is a matter of grave concern that the people of Ladakh have been repeatedly raising their three important demands including inclusion of Bhoti language in the 8th Schedule of Indian Constitution, start of Mansarover yatra from Ladakh and freedom of Tibet from China but unfortunately no one has bothered to ensure that these demands are looked into and fulfilled. They expressed their gratitude towards the BJP leadership, which has been supporting their cause from time to time.