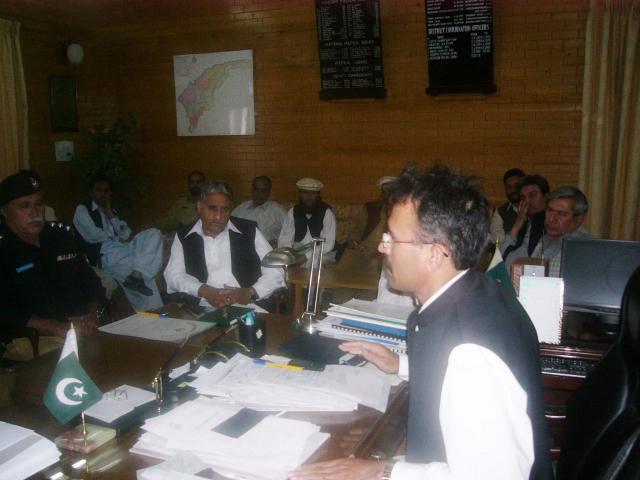 CHITRAL:  A high level meeting under the chair of District Coordination Officer Mutasim Billah Shah of Peace Committee held here at DCO office comprising over leaders of all political, religious parties, heads of all line departments, Tehsil and UN Nazimeen, civil society, Bar association and trade union. Law and order situation was discussed in the meeting. The participants stressed upon to not allow any miscreants or militants to deteriorate peaceful environment of Chitral. The participants also condemned wrong statement of Baliun Nas General Secretary of JUI who tried to create tense in the district. Addressing to the political leaders DCO Chitral said that it is the time of survival of peace environment at each cost. He requested all the stakeholders to fully cooperate law enforcement agencies for maintaining peaceful situation in the district. Any outsiders would be strictly watched and would be keeping under observation he added. The participants also demanded to not deploy Chitral Scouts or Chitral police cops in military operation against militants because of to save from any type of reaction by miscreants.

They said that peace committees should to be extending at each Union Council, Tehsil, District level and police station level by involving local community and notable and elites of the area.  They appeal to religious leaders and Uluma to deliver speeches on peace and human life safety in Friday sermons. The participants in all parties meeting also passed unanimous resolutions.  Tehsil Nazim Chitral Sartaj Ahmad Khah presented a resolution that was passed by all political leaders. Through a resolution they demanded for continuation of subsidy on wheat and fuel (POL) for ten years more otherwise people of the area would be compelled for starvation. They also contradicted and denied a news item regarding of a suicide bomber in suicide attack of Dir was belong to Chitral. They said that it was confirmed by law enforcement  and secret  agencies that  there is no one Abdullah son of Muhammad Ali of Ayun. They said that suicide bomber has prepared fake national identity card by prescribing his address of Ayun village district Chitral.

They also demanded for re-calling of cops of Chitral Scouts and Chitral police who were deployed in military operations against militants and miscreants in Bajawar, Swat, and Waziristan. DCO Chitral requested all Khateeb of Mosques to stress upon peace and human lives importance in their speeches and Friday Sermons. He also ordered to stop street hawkers and Pesco SDO was directed to not exercise load shedding in Sehri and Aftari times. He also issued direction to Works and Services department to deploy staff for protection of main bridges at Chitral River.