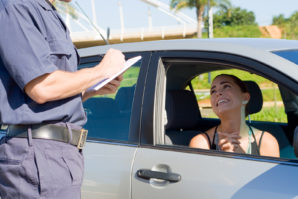 Most drivers in the state of North Carolina assume that when they are driving down the road, law enforcement officers will give them a bit of a “buffer zone.”

In other words, while most drivers understand that going 10 mph (or more) over the speed limit will very likely result in a speeding ticket, few have any worries about traveling one to two mph faster than the posted speed limit allows.

Could this assumption actually lead to you getting a ticket?

As some media outlets have reported, that could be interpreted as the message which is getting spread as part of the Obey the Sign or Pay the Fine campaign, a new traffic safety initiative of the N.C. Department of Transportation (NCDOT).

As reported by WBTV.com, the NCDOT launched the Obey the Sign or Pay the Fine campaign as a way to debunk the buffer zone myth. The goal was to dispel the notion that drivers will not be ticketed for traveling slightly above the speed limit.

The NCDOT’s website issues a warning to drivers, telling them that while many do not think they will get a ticket for speeding if the speeding is minor, “law enforcement will be targeting and ticketing speeding drivers.”

Will the NCDOT and Officers Really Crack Down?

Other sources of information, such as nbc4i.com, say that it is unlikely that drivers will really get cited for traveling just one mph or so over the speed limit.

This belief is supported by a statement that was issued by the NCDOT as a point of clarification.

According to the statement, law enforcement officers do not “intend to change [their] tactics when it comes to enforcing the speed limit,” and “earlier reports that we would begin ticketing drivers going one or two miles over the speed limit were based on a misinterpretation of the initiative.”

In other words, if you are only traveling a couple miles over the speed limit, it is highly unlikely that you will be targeted.

While you may not be given a ticket for minor speeding, however, that is no excuse to break the law. Driving the speed limit is always safer, and speeds should be slowed even further when conditions warrant doing so.

Remember: The speed limit is the law, and being pulled over is completely up to an officer’s discretion if you are violating the law. While it is unlikely that you will be pulled over for traveling one or two miles over the speed limit, it is possible.

When You Get a Traffic Ticket, What Comes Next?

If you get a traffic ticket for speeding, you may have to pay the associated fine. You can also accumulate points on your record, which increases your risk of getting enough points to result in a suspension of your driver’s license and other penalties.

As such, if you are charged with any traffic offenses, hiring a traffic attorney and considering other alternatives may be the less expensive option in the long run. A traffic lawyer can help you to understand those options and your legal rights.