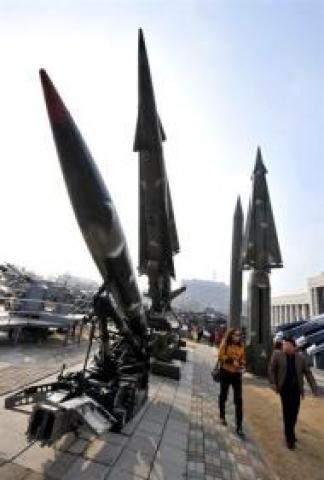 On Thursday North Korea said "fully ready" for war with South Korea.An army General Staff said, "The Lee Myung-Bak group of traitors should never forget that the Korean People’s Army is fully ready for an all-out confrontation."
Korean Central News Agency (KCNA) release this statement to the North’s official, was the latest in a series of increasingly strident threats against President Lee’s conservative government, which have raised cross-border tensions.
Lee Sang-Hee South Korean Defence Minister has said a limited naval conflict may break out around the two countries’ doubtful border in the Yellow Sea. He says the North Korea is preparing to test its longest-range missile within two or three weeks, which could theoretically reach Alaska.
HillaryClinton, the US Secretary of State, who is scheduled to arrive at 10.45 pm (1345 GMT), has said any missile test would be "very unhelpful" for US-North Korean relations and has urged to drop its unkind oratory.
South Korean and U.S. forces would pay a "high price" for conducting joint exercise what it described as war preparations, the KNCA. It said "The war preparations by the US and South Korean authorities that bring the fiery winds of war to the Korean peninsula will exact a high price as they are against peace and the times."
The command has told North Korea the exercise is purely defensive. It will involve a US aircraft carrier, 26,000 US troops and an undisclosed number of South Korean troops.
President Lee says major economic aid should be linked to denuclearisation and pledges to review summit pacts reached between Pyongyang and his predecessors.
Related Article:
North Korea starts Build Long-range missile
Filed under: Opinion, World
Share Tweet Pin G Plus Email
previous article: Sania Mirza enters into doubles pre-quarterfinals of Dubai Tennis Championship
next article: Government takes the responsibility for safety of journalists: Information minister