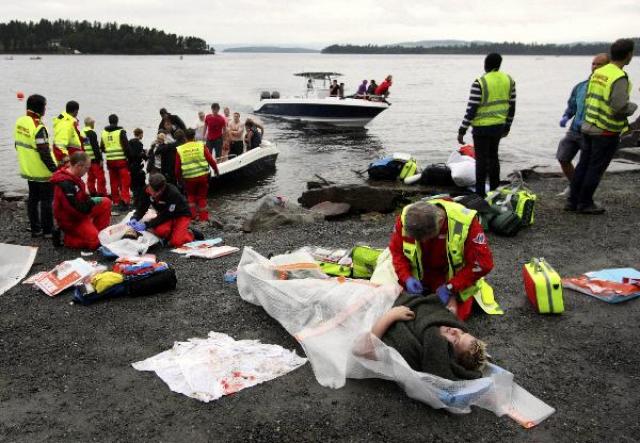 The killing of 92 people in Norway through the bomb blast in Oslo and the gun attack at a Labor Party Youth Camp at Utoya on Friday clearly indicates that even a country like Norway, considerably involved in international conflict management efforts, cannot remain safe from terrorist attacks.

According to the English daily Norway Post, seven died in a bomb blast in Oslo while  85 youths lost their lives in a gun attack at the Labor Party Youth Camp at Utoya. Consoling his people, Norwegian King Harald has reminded that freedom is stronger than fear. He thinks the attack is directed against the core of democracy.

Norwegian Prime Minister Jens Stoltenberg has termed this attack as a national tragedy not experienced since the Second World War. He said, “it is incomprehensible; it is like a nightmare.”  This shows that the Norwegian society had never imagined of such an attack since they were founded on social justice systems from which many other nations drowned in conflicts are trying to learn.

Since the attack took place at a political camp, the preliminary implication is of ideological nature. Global media bring reports that the man who shot youths at the political camp was arrested and is reported to have been indoctrinated by rightist and intolerant ideology. However, there has been no confirmation over the involvement of any specific underground group.

Depending on the political nature of attacks, one can generally estimate that Norway may have to cope with future challenges posed by the rightist spiral of silence. The attacks at the Labor Party Youth Camp imply that the attackers must have been against multiculturalism and progressive social justice systems. The world knows Norway as a cool-minded peaceful nation with a well-founded social philosophy that includes social justice attributable to diversity and unity.

Amidst the crisis, it is encouraging that the  Head of the Labor Party Youth Group (AUF) Eskil Pedersen has vowed to stand for freedom of speech and democracy. “We will not be threatened into silence,” writes the Norway Post daily.

Mainstream political forces in Norway need to plan a diffusive strategy to cope with the growing rightist spiral of silence.