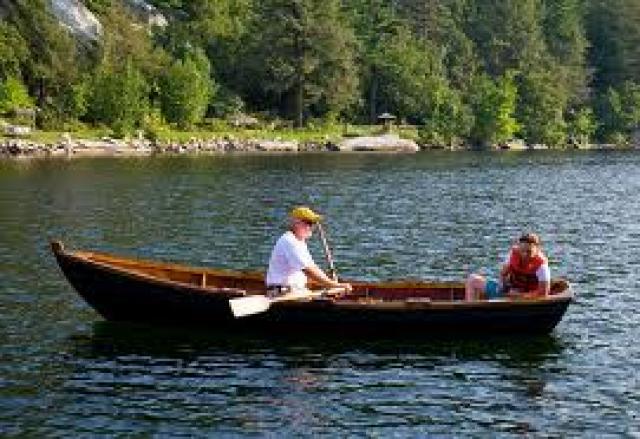 This is a true story and just a little piece of what makes me, me. The lessons I learned in just this one summer of love, trust, and faith, are lessons I have carried forward into my ever growing life as a Christian. God Our Heavenly Father, uses even dads to teach us special lessons for life.

It was the summer of 1958, school was out and my mom and dad decided that as a family, we should spend a couple of weeks at a cottage. As a 10 year old boy, who’d never been out of the city, I thought this a great idea although I had absolutely no idea that even though school was finished, I still had some important learning to do that summer.

It was the July 1st. weekend, Saturday morning. Mom and dad packed up our 1956 Chevy Station Wagon with whatever they figured was necessary and then loaded my younger brother and sister, and myself into the car and off we went. We didn’t have the highways that we do today, as a matter of fact, once we were outside of Toronto, we were driving along single lane gravel roads, but we were out of the city and it felt great.

After about two hours steady driving, we found the turn off to Sturgeon Lake which is just outside of Lindsay, Ontario, and in about 5 minutes travelling down the side road we arrived at our cottage, our home for the next three weeks. I kept watch over my brother and sister, while mom and dad took the stuff they’d packed into the cottage. After they had finished unpacking, I asked mom if I could go down to the water, I couldn’t swim as yet but I wanted to dip my toes in the water. She said ok, but to wait for my dad to accompany me for safety which I did.

Dad and I walked down to the pier and the shoreline and I asked dad if it was ok for me to take off my shoes and wade along the shore. Dad said sure and he removed his shoes too and we both walked along the shore feeling the rocks and the sand under our feet as the water bathed them with the cool lake water washing the shore. Dad told me that he and I were going to get up early next morning and he was going to take me in the row boat fishing. For a city boy, that is a lesson by itself, and i got so excited about it.

After a bit, dad and I headed back up to the cottage, and mom had some food ready. Dad and I sat down at the picnic table and mom brought out a tray of bologna, sadwiches and a big glass of milk for me. I guess next to peanutbutter and jam, bologna was my favorite sandwich so I hungrily began eating like a little pig, stuffing my face.

After we finished eating dod told mom that he was going to take me and show me how to row the boat for our fishing trip. He grabbed two life jackets out of the cottage and we headed down to the lake again to where the rowboat sat in the water tied up to the dock. Dad climbed into the boat and then lifted me in with him. He then put this orange thing over my head and fastened it around me tightly, and then put one on himself. Dad then untied the rowboat from the pier and pushed us away from the dock.

Being a little scared because I’d never done anything like thsis before I clung to dad like crazy, but dad told me to relax that we were safe and I didn’t have to worry. Nervously I let go, as dad reached down and grabbed one of the oars, and hooked it into the oar lock. He then got the other oar and did the same thing on the other side. Dad began pulling on the oars, and slowly we began moving across the water.

It looked like fun so I asked dad if I could try it, and he said sure, that’s why I brought you so you could learn, so he moved me into place and I grabbed hold of the oars and began doing like dad. Thing was though we sort of began spinning in a clockwise circle.

Dad then told me that the trick was to get both oars in the water and try and pull them together at the same time, so that’s what I did. After about a minute or two, I got the hand of it and we weren’t going in circles any longer, but gliding across the water in a straight line.

Dad then told me how to make the boat move in the direction I wanted by using the oars sort of as a rudder, guiding the boat toward or away from the shoreline. Thanks to my dad’s guidance, I excelled and became good at rowing, good enough to take the boat on my own, of course with mon or dad’s permission.

When we got back in to shore I helped dad to set up the BBQ fro dinner. Hot dogs and burgers. Later, we toasted some marshmallows, a treat I’d never before experience, being from the city.

At 5:00 a.m. the next morning, dad awoke me, and we got together our fishing gear and loaded up the boat. After a quick breakfast, dad and I headed out on the lake for some fishing. This was another experience I would never forget. We rowed along the shoreline, until dad found a spot where he wanted to try fishing.

I had no idea why he picked this spot but he did. Dad showed me how to bait the hook with a worm, and then he showed me how to cast my line upon the water. As I remember it didn’t go to far from the boat, but hey, I was fishing. Dad loaded up his line to and cast off further into the water, and we sat there waiting for the fish to come.

All of a sudden I noticed that my red and white float was being pulled under the water, and dad told me that I had a fish. I got excited. I pulled hard on my rod, and I could feel the pull of the fish pulling away from the boat and pulling line from my reel. Dad said, "Start reeling it in Dave" so I excitedly began to reel it in. I fought with that fish for what seemed like ten minutes, although in retro-spect, it was only a minute, until I got it close to the boat.

Dad reached down and grabbed our net, and scooped it out of the water. I’d caught my first fish, a 2 pound, small-mouthed bass. It made me feel like a million dollars. I was so proud of myself, and my dad was proud of me too. After about two hours more of fishing, with a string of fish hanging from the side of the boat in the water, we headed back to the cottage. I couldn’t wait to show mom.

My Dad sometimes believed in what we today call "Tough Love" and learning by experience. Great ways to learn a lesson and never forget.

Now came the time for my lesson in trust. We drew near to the pier, and dad asked me if I wanted to learn how to swim. Excited and scared at the same time, I said yes. Dad grabbed me by the scruff of the neck and lifted me up and dropped me into the cool water. I thought to myself "OH God! I’m gonna drown dad’s throwing me into this water.

At first I sunk and then when I surfaced and began frantically flailing the water fighting to remain a float. I could hear dad calling to me to relax and kick my feet and as I did, low and behold with my feet kicking and my arms flailing, I began to swim. Gasping for breaths, and trying to hold my breath at the same time, I slowly splashed my way up to the pier, where dad was standing.

Dad gazed down at me with a smile on his face and said to me "See Dave now you can swim. There’s no need to be afraid of the water." Dad reached down and helped me out of the water, and I have enjoyed swimming ever since that day.