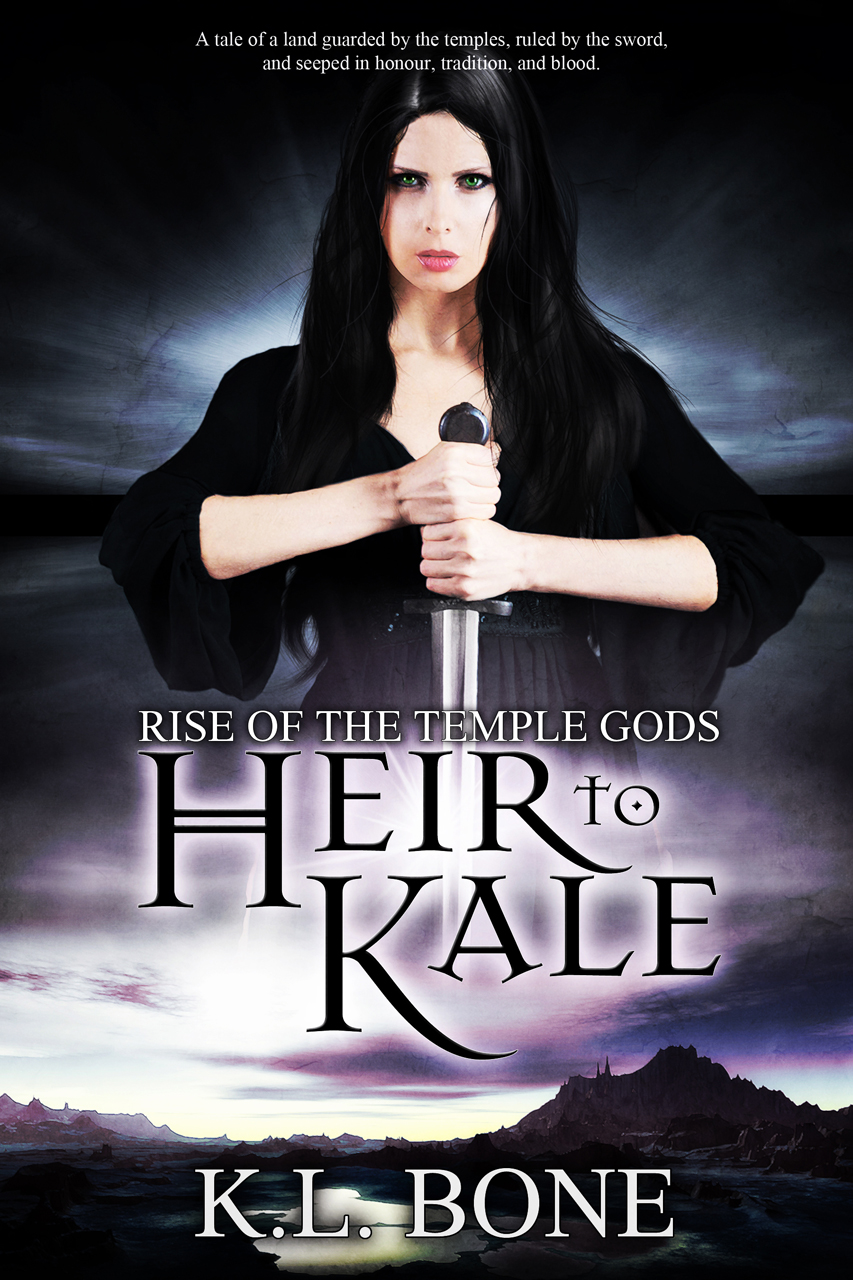 (1888 PressRelease) Combining her creative writing experience and advanced graduate education in literature, K.L. Bone proves to have the unique skills for her highly imaginative and compelling four-book young adult fantasy series, beginning with the first book, Rise of the Temple Gods: Heir to Kale. The second book in the series, Heir to Koloso, is scheduled for a fall 2014 release.

Dublin, Ireland – This first book introduces readers to the land of Kale where the people are followers of one of 13 Temples. To maintain the delicate balance of power in the kingdom, tournaments of combat are held, from which 60 champions are chosen to become Defendants, or a joint team to protect Kale from its enemies. Two of the Defendants, one an adherent of the Temple of Kale and the other the Temple of Koloso, become parents of twin daughters, Princesses Mariana and Ameria. At the age of 5, Mariana is taken to the Temple of Kale and Ameria to the Temple of Koloso to learn the arts of weaponry and hand-to-hand combat.

Upon their 17th birthday, the sisters learn they are the central figures in an age-old prophecy that will force them to fight to determine which will be the next Queen of Kale. Powerful members of the kingdom have their own agendas and secretly initiate assassinations, armed attacks and other disruptive events to influence which young woman will win.

Ms. Bone chose an educational path that has thoroughly prepared her to bring a new level of fictional quality to her adult science fiction and young adult fantasy books. After earning an undergraduate degree in English, she attended the University of Hertfordshire in England because of its special courses in vampire literature where she received a MA in Modern Literary Cultures based on her thesis about the works of Anne Rice. She is presently enrolled in Trinity College in Dublin, Ireland, where she is working to complete her PhD, writing her dissertation on children in contemporary vampire fiction.

“I discovered during my undergraduate classes in creative writing that speculative fiction was not considered a serious genre, although it is what interests me the most and the one genre where I feel I can be most creative,” said Bone. “I, therefore, switched my studies to literature, where I was free to study this genre of fiction, leading to my master’s thesis on Anne Rice.”

“With my extensive scholastic study of literature, I am confident that I have a clear understanding of the elements that make speculative fiction so popular and, with my carefully developed creative writing skills, I hope to be able to bring a depth of plot and character that is often missing from this genre.”

As her reputation as an expert in speculative literature continues to grow, Ms. Bone has become a sought-after speaker and participant at many literary conferences and events. Her current schedule includes:

• The Great Writers Conference in London, June 28-29, 2014, where she spoke about the value of conducting research in the fiction writing process and reading from one of her novels.
• Researcher’s Night at Trinity College during September, where she will read excerpts from one of her novels.
• The Undead Conference in New Orleans at Halloween, which is an event during the Anne Rice/Vampire Lestat Ball. Ms. Bone will share her insights as an author on a panel.

K.L. Bone’s first published work, The Indoctrination, a science-fiction novel for a mature audience, as well as the first and subsequent books in the Kale series are available on Amazon.

For more information about K.L. Bone and to communicate with her, please visit her Website at http://www.klbone.com/

About K.L. Bone
K.L. Bone wrote her first short story at the age of 15, an experience that spurred her interest in a creative writing career and an education in literature. A graduate of the University of Hertfordshire in England with a MA in Modern Literary Cultures, she expects to complete her PhD at Trinity College in Dublin, Ireland during 2017. www.YourBookMarketers.com has been engaged to handle the marketing, publicity and promotion of K.L. Bone and her books.