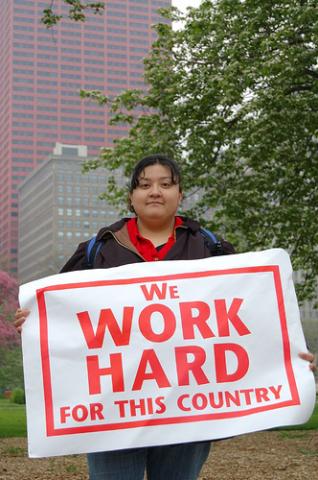 Much of the debate over immigration reform focuses on the status of undocumented workers in this country. Often lost is any discussion about why so many immigrants come to the United States and what happens when they are deported and return home.

Julio Cuellar, 45, is among Salvadorans crossing the border. A member of the national police in his native country for 14 years, he had less than $70 every month after paying his bills. When a friend whose loan he co-signed skipped out on the loan and his daughter was diagnosed with cancer, Cuellar tells National Public Radio he felt trapped and desperate, with no other option than seeking work in the United States.

You can kill yourself here working and never get ahead.

He pledged the deed to his home to a smuggler who abandoned him in the Arizona desert. A diabetic, Cuellar ran out of insulin and had no food or drink for two days. Near death, he was rescued by the border patrol and deported.

Now he has returned to El Salvador unsure of his future. In a two-part series, NPR tells the story of Cuellar’s journey and what he now faces back home in El Salvador with a sick daughter, no job and possibly no home. Click here to follow Cuellar’s journey home and learn more about what really happens to immigrants who come here seeking a better life.

The AFL-CIO has called for real, comprehensive immigration reform that protects the rights of immigrant workers and provides a pathway to citizenship.