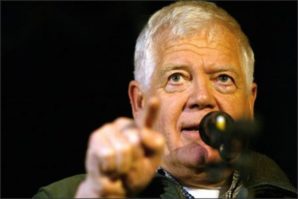 “With so much of the region in turmoil right now, it seems hard to imagine that we could be on the verge of, arguably, the most important diplomatic achievement in the Middle East in recent U.S. history”, says McDermott.

On November 18, 2014 REP. Jim McDermott of Washington asked for and was granted permission to address the United States House of representatives for 5 minutes regarding the situation with Iran:

“The Chair recognizes the gentleman from Washington (Mr. McDermott) for 5 minutes.

Mr. McDERMOTT. Mr. Speaker, I rise this morning on what could be the eve of a nuclear deal with the Islamic Republic of Iran as U.S. and European and Iranian negotiators are going back to Vienna for a final round of talks.

With so much of the region in turmoil right now, it seems hard to imagine that we could be on the verge of, arguably, the most important diplomatic achievement in the Middle East in recent U.S. history. The leadership of President Obama, the tenacity of the U.S. negotiators, and the determination of President Rouhani and his team have set the stage for a landmark agreement that would turn the page on decades of distrust, dissension, and cynicism.

Here is what the nuclear deal would mean: a profound reduction in the decades-long tension between Iran, the U.S., and our allies that has set us on a path to war; a contained Iranian nuclear program with verifiable, internationally accepted limits; meaningful sanctions relief that bolsters Iran’s flagging economy and allows U.S. businesses access to a potentially vibrant market; finally, an opening for a broader understanding between the U.S. and Iran, as well as an opportunity to work with Iran as an ally in the fight against ISIS.

President Obama deserves enormous credit for his steely resolve in pursuit of a nuclear deal, especially in the face of those hoping he will fail. If we do not reach a nuclear accord next week, if a deal is delayed, or if, heaven forbid, the talks collapse, I believe President Obama is still owed our thanks.

It has become fashionable around these halls and certainly in the media these days to deride the 44th President, to call him “aloof” when he acts methodically or to threaten impeachment when he acts decisively to promote the best interests of the American people. The fact that he has the audacity to try with persistence and openness, in the face of withering doubt from friends and allies, is a mark of a true statesman. Many in this Chamber have already raised their strong objections, as we have recently heard, to a potential deal, and they make no secret of their thinking of President Obama as being on a fool’s errand, but I am reminded of what Teddy Roosevelt said of leadership.

Credit belongs to the man who is actually in the arena, whose face is marred by dust and sweat and blood ….. who, at the best, knows, in the end, the triumph of high achievement and who, at the worst, if he fails, at least fails while daring greatly so that his place shall never be with those cold and timid souls who seek neither victory nor defeat.

President Obama deserves credit for what he is doing, and we wish him Godspeed in the negotiations as they come to their near end.”

Note: Jim McDermott is a senior member of the House Ways and Means Committee, which is responsible for writing tax law. Since the Ways and Means Committee is also responsible for dealing with any and all tax-related matters, nearly every issue falls under the Committee’s jurisdiction – this includes health care, Social Security, economic development, trade, the environment, housing, and personal and corporate taxes, just to name a few. Below is the official description of the Committee, as well as the Subcommittees of which Jim is a member.  The Committee on Ways and Means is the oldest committee of the United States Congress, and is the chief tax-writing committee in the House of Representatives.

Filed under: News, World
Share Tweet Pin G Plus Email
previous article: Iran is the “foremost supporter of terrorism in the world”, says Congresswoman Ros- Lehtinen
next article: ISIS have “brainwashed thousands of young individuals and have set their eyes on preparing a new generation of terrorists”, warns Rep. Thompson