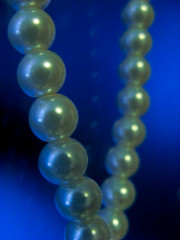 Golden South Sea pearls were on stunning display at the Asia Society in New York, telling a tale of Filipino mythology in celebration of the brand’s success in the U.S.

“Golden South Sea pearls are only produced by the golden-lipped oyster, which makes them rare and exquisite,” said a representative of Pearls Only, a Texas-based pearl jewelry retailer. “Colors can range from white to champagne and rich gold.”

The designs tell the stories of Filipino myths: the daughter of a goddess who lures men to great depths and devours them; a woman whose wrath controls the ocean’s tides; a handsome farmer who is caught uttering ancient prayers to the wind for a bountiful harvest.

The Hanan necklace was the star of the show in New York, and was named after the Goddess of the Morning. The piece featured a jeweled gold garland with wild berries made of white and gold pearls, golden tendrils and tourmaline spiders.

Named after the goddess who created earth, the Minaden earrings featured blooming flowers with raw tourmalines and gems.

It takes five years and over 300 steps for Jewelmer Joallierie, established in 1979, to cultivate its pearls from its farm in Southern Palawan. The process, while painstaking, is sustainable. Philippine South Sea pearls are between 10mm and 12mm on average, making them some of the largest in the world. Master craftsmen based in Vendome, Paris craft the brand’s pieces of wearable art, which are set in 18K gold and accentuated by fine gems.

“Having the golden South Sea pearl worn by men and women all over the world is truly an honor,” Branellec said. He noted that the collection “symbolizes the beauty and skill of the Philippines,” and that the pearl is a symbol of the planet’s health.

“Without a beautiful environment, we cannot have beautiful pearls,” he said.

Only a limited number of pieces will be available from Wynn Wynn Ong and Jewelmer, but they both hope the collection is just the start of a long collaboration.

Filed under: Business, Sales
Share Tweet Pin G Plus Email
previous article: Jewelry Demand Slumps 21% in Q3 Worldwide, 1% Down in Europe
next article: How to Eliminate 99% of Germs in Your Home Naturally