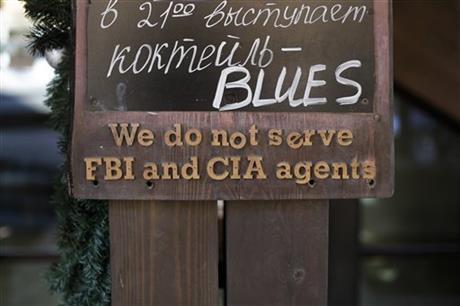 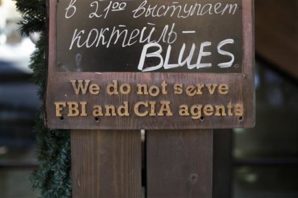 Associated Press photographer Jae C. Hong took the picture of the “odd sign” on Friday. It indicated that “We do not serve FBI and CIA agents.” Another sign read “We remember the Cold War”.

“For the most part the Central Intelligence Agency is despised in Russia, as is the FBI. That is reflected here in the sign in Sochi”, explained Dymitry, a Russian friend speaking through an intermediary via Facebook,. Dymitry –  did not wish for his last name to be used citing concerns for the safety of his friends and family members.

Until its collapse, the Soviet Union was the primary target of the CIA, just as the US was the “main enemy” to the Soviet KGB and GRU. Hostility was developing as the Second World War ended and continued well past the end of teh Cold War.

For Dymitry, who father was a pilot killed by Afghan  Mujahideen during the early 1980’s using a U.S. made Stinger missile during the Soviet Invasion of Afghanistan the idea of serving CIA officials, even during the Sochi games are repugnant.

“The CIA funded the Mujahideen in Afghanistan through the CIA. This is a well known fact”, he said. “I can certainly understand Russian citizens not wanting to serve these pigs”, he said.

The U.S.-funded Afghan insurgents were called mujahideen, an Arabic word that means “strugglers” or “strivers.” The word has its orgins in Islam, and is related to the word jihad, but in the context of the Afghan war, it may be best understood as referring to “resistance.”

The mujahideen were organized into different political parties, and armed and supported by different countries, including Saudi Arabia and Pakistan, as well as the United States, and they gained significantly in power and money during the course of the Afghan-Soviet war.

The fierceness of the mujahideen fighters, their stringent, extreme version of Islam and their cause—expelling the Soviet foreigners—drew interest and support from Arab Muslims seeking an opportunity to experience, and experiment with, waging jihad.

Among those drawn to Afghanistan were a wealthy, ambitious, and young Saudi man named Osama bin Laden and the head of the Egyptian Islamic Jihad organization, Ayman Al Zawahiri.

With respect to the FBI – Dymitry said they are of the same “ilk.”

“The feeling is that the FBI mistreated our operatives in America when they were captured in 2010 – that lead to the famous spy swap in September of that same year. Among those was  Anna Vasil’evna Kushchenko (Анна Васильевна Кущенко) also known as Anna Chapman – who is considered a hero of Russia”, he said.

Dymitry indicated he read numerous reports that these “heroes”, as he calls them were beaten and tortured by the FBI .

He even cited a report I wrote back in 2010 indicating the same, which surprised me (See article: “Torture allegations made against FBI Interrogators here in the United States in Russian Spy case last spring!”  http://www.allvoices.com/contributed-news/7333931-torture-allegations-made-against-fbi-interrogators-here-in-the-united-states-in-russian-spy-case-last-spring

“We don’t wish to forget that”, he added.