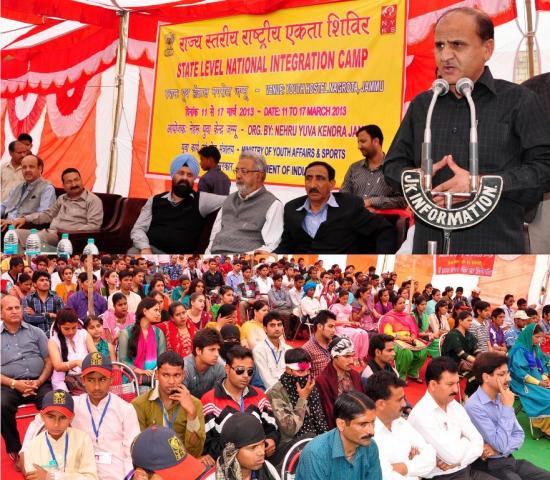 As many as 150 youth from eight different states of the country are attending the camp at youth hostel Nagrota. The participating states are Himachal Pradesh, , Haryana, Uttaranchal, Utter Pradesh, Rajasthan, Madhya Pradesh and J&K.

Minister for Medical Education, Youth Services and Sports  Taj Mohi-ud-Din was guest of honor on the occasion.

Addressing the youth delegates, Deputy Chief Minister called upon them to act as peace messengers of the state’s rich culture, language, tradition and heritage back at their home states. He said the participants would   know in detail about the state and back home   they should share their experiences with their friends and peer groups.

“Our state has lot to offer for visiting tourists in terms of scenic beauty and pilgrim tourism and I hope after getting first-hand experience you will act as brand ambassadors for the state,” he added.

He appreciated the efforts of NYK in providing the youth from different states an opportunity to come together and share their culture, traditions and languages thus promoting national integration among them.

“Youth need to inculcate in them the ideals shown by great leaders of the country like Mahatma Gandhi and have to spread the message of mutual co-existence and brotherhood,” he exhorted. He said the younger generation has special role in nation building and future of the nation was on young shoulders. He said youth are future leaders, bureaucrats and citizens of the country and they have to get actively involved in various social activities to bring a positive change in the system.

He said the youth have to be extra cautious against the divisive politics being played on the name of religion, language, race and cast. The biggest threat is not from external forces but from those elements within the society who try to derail the peace and development by engaging in cheap politicking, he added.

Speaking on the occasion,  Taj called upon the participants to work for modern and play their important role in fulfilling the dreams of Mahatma Gandhi, Swami Vivekananda, Rajiv Gandhi and Jawaharlal Nehru. He said NYK deserves a special accolade as it has made possible the integration of varied cultures and traditions of the country.

He said dream visualized by stalwart leaders of the country for a golden tomorrow can only become reality by the active participation of youth in the process of nation building.

Highlighting the importance of holding such camps, he said exchange of ideas and people to people contact, was key towards attaining a common vision to make the world a better place to live. He asked the youth to workd hard and hel the country to keep pace with the   world.

In his key note address, Zonal Director, NYKS  Nabin Kumar Naik,  gave brief resume of the activities of NYKS and apprised the gathering that the present camp is second in the series, as one such camp is already underway in Udhampur, adding that very soon the NYKS would organise a camp in Baramulla.