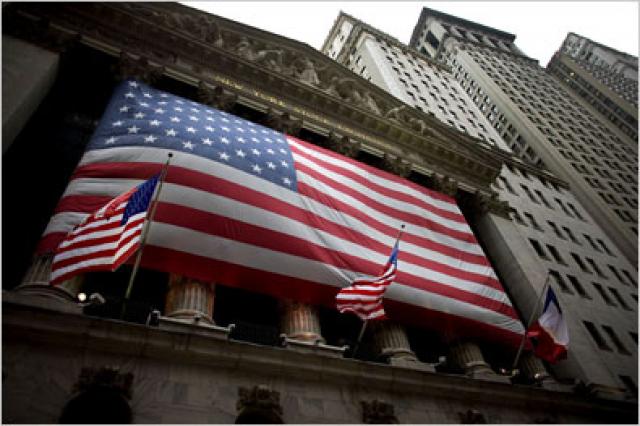 New York, NY (GroundReport) – The New York Stock Exchange has been imposing sight for the many tourists visiting Wall Street each day.

But that’s about to change. Once a symbol of captialist prosperity, the downturn in economy is going to mean a shift among financial landmarks in NY.

An American flag the size of the exchange, sculptures on its facade, and the statue of George Washinton opposite the exchange were heralded Wall Street as a place for risk-taking and reaping its rewards.

However, with many of New York’s top investment banks shuttering down, sold or shifting to archaic commercial ventures, the Big Apple’s title as the global financial haven could be jeopardized.

According to published reports, the transformation Wall Street and New York began way before the financial downturn that has become particularly exaggerated in the second half of 2008.

Ron Chernow, an author who is familiar with the on the history of Wall Street, told The New York Times, ”It’s going to be a long, slow process and take many years for us to really restore our leadership in the world." Adding, ‘New York has been damaged, and some of it I think is permanent.”

Bear Stearns was the first to go bankrupt. The premier bank was purchased by JP Morgan for $29billion in a deal backed by the U.S. government. Meanwhile, Lehman Brothers filed for Chapter 11 – the biggest bankruptcy claim in U.S. history – while Europe bankers Barclays Plc were quick to sweep up some of its ailing units.

Concurrently, Goldman Sachs and Morgan Stanley opted to be confined to the commercial banking business. And Merrill Lynch, closely linked to the iconic bull on Wall Street, sold out to out-of-town bank, Bank of America based in North Carolina.

Most recently, Citigroup has come crumbling down in recent weeks, with news of layoffs affecting some 20,000 emloyees.

At the same time, some anlysts say that London, Tokyo, and even Hong Kong have become world class financial hubs that mirror New York, cites the Times.

According to statistics from the World Federation of Exchanges, the financial swin in cities like London have been going up over a ten-year period from 1997-2007, while the new capital on a yearly basis has dwindled by 25%, say reports.

”In the short and medium term, the U.S. will still remain a very important financial center, and I think most likely the most important. But after the term of five years, I’m no more sure,” said Lorenzo Gallai, economic statistician at the World Federation of Exchanges, reports The New York Times.

Observers say that New York city has been losing its status as thw world financial captial for a while now.

Frank Braconi, the New York City comptroller’s chief economist, said in October that the economic meltdown had ”sped up the process of financial dispersion that was already under way.” He added, that ”in coming years, New York will have to share the financial stage,” reports The Times.

Dutch tourist Maryke Heyman told the New York Times while on a visit to Wall Street, "I don’t know where it ends. Maybe it’s not anymore the big place in the world.”