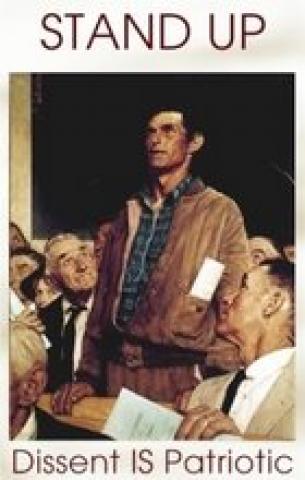 If Americans believed any "change" would occur  with the change in Administration, it just goes to show that the only change that will be occuring is a change in how quickly Americans seem to be losing their civil liberties also under the Obama Administration.

Apparently, in addition to that great "secret" provision included within the stimulus on the initiation of another unlawful search and seizure in the establishment of a National Health Care Database violating American’s privacy rights even far greater than Bush’s Patriot Act post 9/11 (what’s more personal and private than a citizen’s health information), now there is a move to enter into "international" treaties outside Congressional oversight and provision by the Obama Administration to gain access to citizen’s computer hard drives and software.

The reasons being off handedly given for this "treaty" and it’s secrecy are "national security," and stricter copyright law enforcement within the international community.

It is intended to reclassify such violations of now civil copyright law in this country as criminal matters throughout the international community.   Now that we are unfortunately becoming more and more global dependent, rather than sovereignly independent there appears to be more and more legislation now coming from the international community – a great deal of which also infringes upon American civil liberties as guaranteed in our Constitution without acknowledging it’s provisions.

Even If those laws were tightened and criminalized, the proper procedure under our Constitution still requires "probable" cause and also a search warrant before such material could be seized or gathered, and proof that there is an intent to resell it for private gain abridging and violating existing domestic and international copyright laws which are already on the books.  If you copy a CD and give it to a friend, rather than sell it, is this copyright infringement or simply loaning it for the private use of a friend?

So far there has been little disclosed about this treaty.  It woudl appear, however, maybe due to the secrecy as many Americans have learned this is not a good sign.

This secrecy surrounding these measures has been defended by Mr. Obama for that now post 9/11 standard, "national security" reasons.  If this is simply a move to "criminalize" now civil copyright laws, just what does national security have to do with a law dealing with pirated movies and CDs?

I do hope this new "law" in the form of a "treaty" is intended only for enforcement in transporting pirated copyrighted materials across international borders, rather than having any domestic application without at the very least acknowledgement what legal steps and protections are already law in this country absent amendment in order to prosecute any American for any violation of copyright infringement if this is now criminalized as the standards for criminal convictions in this country are still "beyond a reasonable doubt."

It would appear that in taking such steps, those industries which seek to get stricter enforcement in this country by criminalizng it – since the civil standards are much lower of "preponderance of evidence," may be in the end shooting themselves in the foot.

Here is the article:

Filed under: Opinion, Politics
Share Tweet Pin G Plus Email
previous article: 6 Ways to improve your life and the world around you
next article: Republicans makes Obama’s economic plans murky