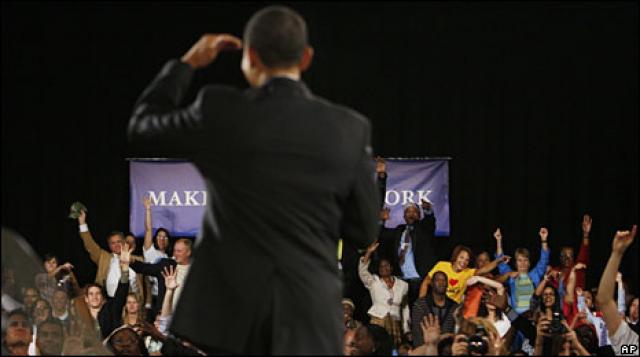 The approach seemed to work, as the president was regularly interrupted with applause and chants of his campaign slogan: "Yes, we can."

Mr Obama chose to come to this city near the western coast of Florida because it has the highest percentage of home repossessions in the country.

And as he did during the campaign to good effect, Mr Obama tried to present himself as being above the partisan bickering in Washington over the economic recovery package, saying that many in the nation’s capital did not fully comprehend the dire circumstances facing ordinary Americans.

Tweaking a phrase from his campaign, Mr Obama said: "I believe in hope but I also believe in action."

Mr Obama also potentially raised the stakes on his own political future by tying the results of the stimulus plan to his own success as president.

But some fortuitous timing and the appearance of a financially stricken pensioner may be the elements that help boost Mr Obama’s case for the ultimate passage of his financial stimulus package through Congress.

Midway through the question-and-answer period, an aide handed the president a note staying that the US Senate had passed his economic stimulus plan.

He immediately announced the results to the packed auditorium.

But as the crowd applauded, the president just as quickly reminded them that the deal was not done yet, as now the Senate must reconcile its version of the legislation with that of the House of Representatives.

When this will happen and what compromises might still have to be made is unclear.

And Mr Obama, who critics sometimes accused during campaigning of being unable to connect with ordinary Americans, had no trouble on this front in Fort Myers, in part because of a homeless senior citizen named Henrietta Hughes.

With all eyes and cameras fixed on her, Ms Hughes rose to her feet and pleaded for the president to help her receive financial assistance and shelter

As she began to cry, Mr Obama came off the podium to give Ms Hughes a hug and promised that his staff would be in touch with her shortly.

In an interview with the BBC after the event, Ms Hughes, still in tears from the emotion of meeting the president in person, said she believed the White House would help her.

"I just want to thank God that he came here," she said. But for now, this three-time cancer survivor has to sleep in her car along with her son, Corey, every night, she said.

A White House official said the administration had been given her contact details.

For today, Mr Obama can leave Fort Myers knowing that he has regained some momentum on what he calls the most pressing issue his administration is currently facing.

A senior White House official suggested there could be more of these events in the near future, saying: "Expect a lot more domestic travel soon."

Next stop for Mr Obama will be Peoria, Illinois, on Thursday – a city where more than 24,000 jobs were lost during last month alone.