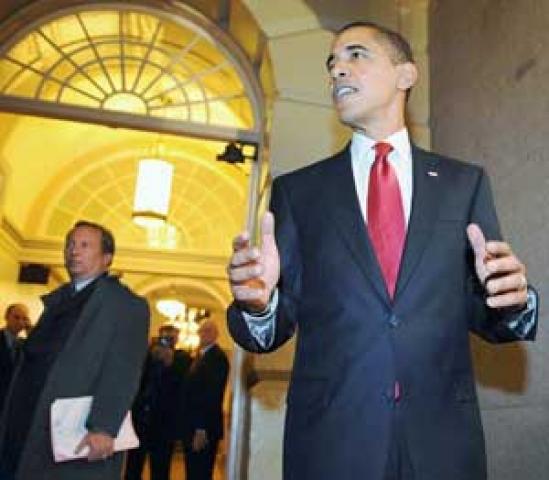 Reporting from Washington — President Obama, walking a fine line between optimism and caution, said Friday that there were "glimmers of hope" for the economy but warned that substantial, potentially difficult government action was still necessary to ensure a healthy recovery.

"We are starting to see progress," Obama said after huddling with senior members of his economic team at the White House. But he warned that the country must not "flinch" at the difficult steps to come.
Behind the president’s words is a growing consensus among economists that, despite signs that the nation’s financial picture is improving, major new government aid is still needed if the nation is to avoid prolonged economic anemia.

As the rescue effort stretches to include banks, auto companies and insurance companies, it will require many billions of dollars more in bailout funds, especially for the financial system, these experts say — money that Congress and a recession-weary public may be in no mood to approve.

What’s more, the government’s finances are increasingly strained by the recession. The Treasury Department said Friday that lower tax revenue and rising payouts for jobless benefits had driven the federal deficit close to $1 trillion for the first six months of the current fiscal year.

Some analysts say that unless banks and other financial institutions have enough capital to play a robust role in extending credit, the economy could be stuck in neutral for months or years more.

Economist Anil Kashyap, a banking expert at the University of Chicago’s Booth School of Business, said the government couldn’t afford to lapse into half-measures just because the economy and the stock market were showing signs of life. That means calling on Congress to approve a big new aid infusion.

"They’re going to get one more shot" with Congress, Kashyap said. "They need to worry about whether the funding will dry up."

In his meeting Friday, Obama got a progress report on the "stress tests" being conducted on the nation’s 19 largest banks, an effort the administration has said is a key first step in determining how much more money the ongoing bailout will require to help banks survive if the economy takes more bad turns.

Officials have not disclosed the results of the tests, but there have been some indications that they believe the capital shortfall may not be quite as large as had once been feared.

That’s good news, economists say, but maybe not good enough. The fear is that the government will force the banks to raise only enough capital to stay afloat — short of what’s necessary to restore health enough to encourage large-scale lending.

How much money that would take is a matter of debate. But most experts agree that the $100 billion to $135 billion left in the government’s Troubled Asset Relief Program probably won’t come close.

Mark Zandi, chief economist of Moody’s Economy.com, estimates that for the government to live up to its pledge to support the 19 banks undergoing stress tests no matter what, it will need $750 billion more from taxpayers. He acknowledged that Congress might be reluctant to bankroll such a request.

Uncertainty over the unfolding banking rescue also may have unwelcome consequences. Although the rising stock market is clearly encouraged about the banking industry’s progress, other elements of the financial world aren’t so sure.

Simon Johnson, a finance professor at the Massachusetts Institute of Technology’s Sloan School of Management and former chief economist of the International Monetary Fund, pointed out that a key gauge of investor confidence — the market for credit default swaps — shows that some investors have been making big bets that the risk is growing that struggling banks like Citigroup and Bank of America will collapse.

Those markets can change in an instant, but if that sort of pessimism continues, analysts said, it can spiral into a self-fulfilling prophecy: Widening spreads can negatively influence credit ratings for financial institutions, raising borrowing costs.

Given all the sensitivity, the Obama team will need a strategy for communicating information about the stress tests, experts said. Officials know they are crucial to determining which banks have too little capital. But forcing ailing companies to accept new capital without setting off alarm in the markets may be difficult.

Kashyap said the most important action the government could take was to clearly define its strategy and implement it quickly.

Avoiding further erosion of confidence, he said, will require forcing the banks in need to either raise enough capital privately or accept enough public capital to make sure robust lending can resume.

The danger, Kashyap said, is that banks take in just enough capital to survive and then regain strength only slowly, by relying on incoming deposits and the small return they get from investing them.

"The reason to bail them out is to increase lending, not to buy time so they can rebuild slowly," he said.
Mail id is pradeepkumar8777@gmail.com

Filed under: Business, US
Share Tweet Pin G Plus Email
previous article: Pentagon’s Changes – Who do they affect?
next article: Bangladesh failed in balancing MP-LGR authority