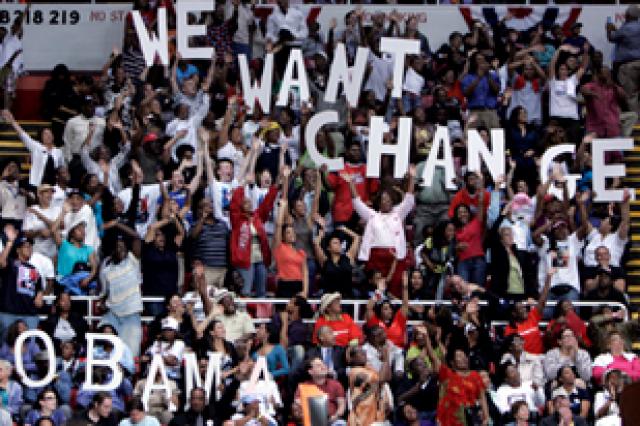 The sober and calm looking would-be president of U.S.A has finally knelt down before the Muslim women who were barred from sitting behind him during a campaign rally in Detroit.

As soon as the incident occured, it became  talk of the town within no seconds by dint of third pillar of democracy. And when, the  so-called sexiest  (according  to the survies that might have been promoted by Obama himself) personally appolized the muslim women Thursday, the dua motives of the prospective president seem to have been fullfilled.

The talk-of-the-town incident seem to me nothing but the pubilicity stunt, as is usually done by the politicians. And if it is the would-be president of USA, each and everybody would like to have a say.

First the staffers or the volunteers stopped  the two women ( Shimaa Abdelfadeel andHebba Aref ) who were bearing Islamic  headscarf  (the hijab), to have a seat just behind Obama, and later  the democratic prospective president came ahead to ask forgiveness.

All and sundry are speaking hight of his this move, and the ladies have no control over  their happiness.

There is an MLA in India, who, for gaining publicity, cleans the garbage and dirt of his colony. He does it in the hope of becoming the president of India. But alas!! he has no chance, as there are already many vultures who have left nothing but the sands at the end.

Lol, not a herculian work indeed.

Filed under: Politics
Share Tweet Pin G Plus Email
previous article: Sex Education in India should be meaningful and intelligible
next article: Lower Your Stress Level by Increasing Your Intuition- even with a busy schedule!