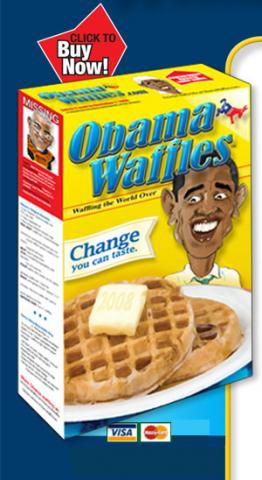 Mark Whitlock and Bob DeMoss from Franklin, Tennessee sold numerous boxes of their "Obama Waffles" at the Republican Value Voters Summit in Washington DC last week before organizers said they couldn’t because the boxes were racists and in poor taste.

The box of Obama Waffles features a caricature of Barack Obama tha resembles the cartoon of Aunt Jemima that went under fire for being racist some years ago. The Obama Waffles organizers said the product was meant to be a satire and commentary on Obama’s politics, not a racist attack. The heart of the satire is an accusation that Obama often "waffles" or changes his opinion on important political issues.

Elsewhere on the box of Obama Waffles is a picture of Senator Obama in Islamic clothing and a recipe for "Open Boarder Fiesta Waffles." The recipe is described as being able to feed "four or more illegal aliens."

Mark Whitlock and Bob DeMoss reported that the boxes, at $10 a piece, were selling very well before authorities at the Family Research Center (FRC), the company that ran the Value Voters Summit, shut down their both. Among their customers was CNN host Lou Dobbs.

Harry Jackson, a conservative pastor and member of the FRC condemned the product as racist. "There is one thing that could torpedo McCain’s efforts," Jackson said, "a sense that McCain is playing the race card against his opponent instead of using a legitimate political strategy."

Obama Waffles are online at www.obamawaffles.com where you can find a list of Obama’s political "waffling."

Here is another recent election-related article from GroundReport.