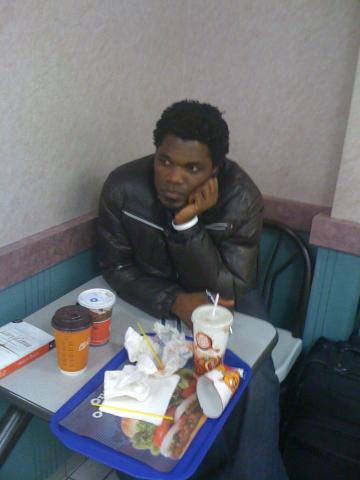 It happened March 24, 2011at 7.55a.m. right here at the Maxwell Meighen men’s homeless shelter in Toronto, where I’ve been trapped for the last three weeks. I blinked for one second and my wallet disappeared. My credit cards, debit cards, Canadian Permanent Resident card, health card, SIN card, etc., gone!

My first reaction: WHY! Why, after all that I have gone through already. Why do victims always end up paying the price?

I worked for CAP AIDS, a Canadian charity that supports HIV+AIDS work in Africa, for seven year. The relationship was highly exploitative, especially during the last 2.5 years. In my last year with the organization, I was routinely harassed, emotional manipulated, neglected and sabotaged by some directors of the organization.

These misguided individuals sought to replace me with a white executive director. They believed that only a white face could boost the charity’s fundraising efforts in Canada. Because of my unwavering commitment to fighting racism, I stayed on during the mistreatment to thwart them.

But last August, the directors got their way. They replaced me with a white individual whom the president of the organization had been secretly grooming for years. Interestly, they exploited my parasitic relationship with the organization.

In July, I’d appealed to the directors to address my exploitation and harassment. I’d also rejected a recent review of my performance, which the directors had manipulated to harass, demean and frustrate me.

The directors responded by victimizing and discriminating against me. They abruptly ended our parasitic relationship without addressing the issues. And they hired a white executive director.

At the end of February, I lost my apartment, after I’d failed to pay rent for four months. That’s how I ended up homeless.

Now, in addition to the ongoing struggle to leave the shelter, I’ve to start the process of restoring my `identity’ apparatus. If the last eight hours are anything to go by, it’s not going to be easy. I stopped by the bank and secured my assets. I visited the local Service Canada office and received very little help. I visited two police stations and filed a police report.

In the meantime, I’m beginning to accept this latest ordeal. All that I’ve lost I’ll someday, soon, regain. Plus some more. Besides, despair is not an option. Hope is a terrible thing to lose.

My ongoing ordeal can only make me stronger!