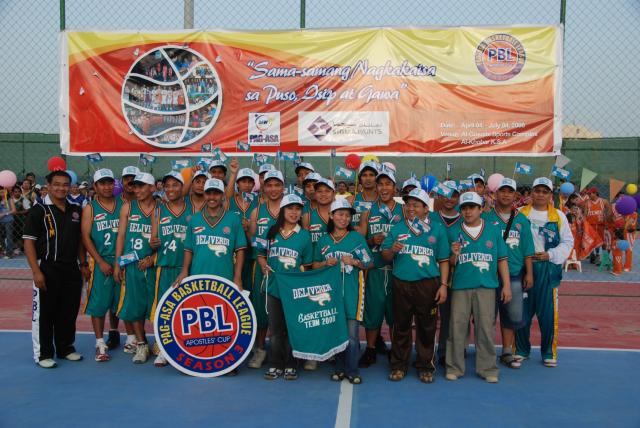 Roy Cortez (17) and Jeylord Ortega (17) obviously jittered their opponent with surprised lane attacks ending the first half with 31-24.

DPF-IM tried to recoup their 7 points lost with Mike Caneos charging sparks repeatedly rallied in the second half to accumulate 10 points but failed to make considerable relief in the last 14 seconds that could have tied up the match.

Contender Elvin Manalo (18) was indeed strong to outdone highest pointers Cortez and Ortega of the OFC, but his sole defense was beaten down by time. At crunch, OFC jumper Arthuro Manuel made 2 points shot to end the playoff with 55-53.

The opening match was just part of the spectacular beginning of the tournament that started a remarkable colorful parade of the 20 participating basketball teams and muses, followed by the Philippine national anthem sung to the pitch of Tricia Ann Mendiola of the Filipino Pop Music Club (FILPOP) and the invocation led by Roger Manalang, PBL Season 3 Deputy Commissioner.

Nicodemus Plando, CWW Head, welcomed all participating teams, guests and all present and the reading of the oath of sportsmanship by the PBL Season 2 MVP Awardee, Edwin Dimla of UR-Deliverer. Welfare Officer Edgar Lim of the Overseas Workers Welfare Association (OWWA) and Jane Tupaz, Nursing Director of Al Dossary Hospital and recently been the 2007 Bagong Bayani Awardee of the Philippines inspired the tournament with their inspirational messages.

“I highly admire your oneness and camaraderie of organizing sports tournament. I wish all nationalities in the Kingdom emulate the same,” said Khaled Bahgat, Al Gosaibi General Manager, in his short message. Bahgat headed the list of jurors for the awards.

The award for Best in Uniform was given to the UR Deliverer while Best Organized Team was awarded to JCILSA 1. As unanimously voted by the jurors, Ms. Tintin Alarca of the RLMC team bagged the Best Muse and named Miss PBL Season 3 thereafter.

Commissioner Max Bringula capped the event on his closing remark. “Winning in the game is not what matters, but winning through the approval of the Divine Providence. That should each team and players have to aim for,” said Bringula. This year theme is “Sama-samang Nagkakaisa, sa Puso, Isip at Gawa.”

Bahgat and Miss PBL Season 3 served the ceremonial toss to signal the beginning of the game.

SIGMA Paints SA Ltd sponsored the airtime cost of the games and its cable networking throughout the season, wing poster and flyers at tournament site, and PBL-SIGMA Paints Poster and Streamer.

Other sponsors include the SARA Corporation for the PBL Streamers and Banners (c/o Ruel of POPCF), McDonalds for balloons, ABS-CBN (TFC) for TV coverage, Arab News and Saudi Gazette for print media coverage and the Mohammad Al-Dossary Hospital for Medical team assistant throughout the tournament season.

Filed under: Sports, World
Share Tweet Pin G Plus Email
previous article: Yahoo Agree with Microsoft offer, but its need much money
next article: Anger at Mbeki’s “No Crisis” Claim in Zimbabwe