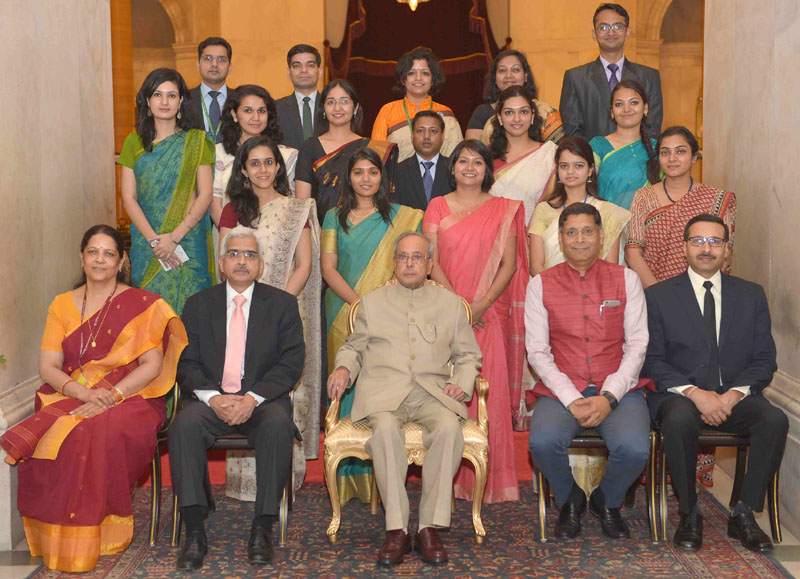 The President, Mr. Pranab Mukherjee with the Officer Trainees of the Indian Economic Service of 2014 (II) Batch, at Rashtrapati Bhavan, in New Delhi on May 10, 2016. The Secretary, Department of Economic Affairs, Mr. Shaktikanta Das and the Chief Economic Adviser, Dr. Arvind Subramanian are also seen.

‘The World Is Moving Fast And India Has To Keep Pace’

New Delhi (PIB-GR-TYP-BIN): A group of Officers Trainees of the Indian Economic Service 2014 (II) batch called on President of India, Mr. Pranab Mukherjee at Rashtrapati Bhavan on May 10. Addressing the Officer Trainees, the President said the service they have joined provides them opportunity to serve the people and country for many years. They will have to advise the political executive in the formulation of policies. The Chief Economic Advisor post is generally held by an accomplished economist. The Economic Survey is a highly admired document for its clarity of thought and objectivity.

The President said he feels proud about what India has achieved and optimistic about what it can achieve. Indian economy has witnessed many ups and downs. From 1951 to 1979, India had an average growth rate of 3.5 per cent which was called the Hindu Growth Rate. Our economy grew at an average rate of 5 to 5.6 per cent in the decade of 1980s. From 1991 onwards, our growth rate rose to an average of 7 per cent.

Our present growth rate is around 7.6 per cent. But we should not be complacent. We must raise our growth rate to 8.5 to 9 per cent annually for the next 15-20 years if we have to achieve our developmental goals. This will enable poverty elimination and not confine us to poverty alleviation.

The President told the young officers that the expectations from them are high and a heavy responsibility rests on their young shoulders. The world is moving fast and India has to keep pace. The time available is short but India’s strength is its mighty minds. India needs competent and knowledgeable officials to guide policy making. He concluded asking them to be the change they seek and recalled Mahatma Gandhi’s famous words “Recall the face of the poorest and the weakest man whom you may have seen, and ask yourself, if the step you contemplate is going to be of any use to him”.

Filed under: Education, News
Share Tweet Pin G Plus Email
previous article: Want to be a Great Project Manager? 4 Things You Must Avoid
next article: Indian Youth Can Turn New Challenges Into Opportunities In The World Of Work: Shankar Aggarwal