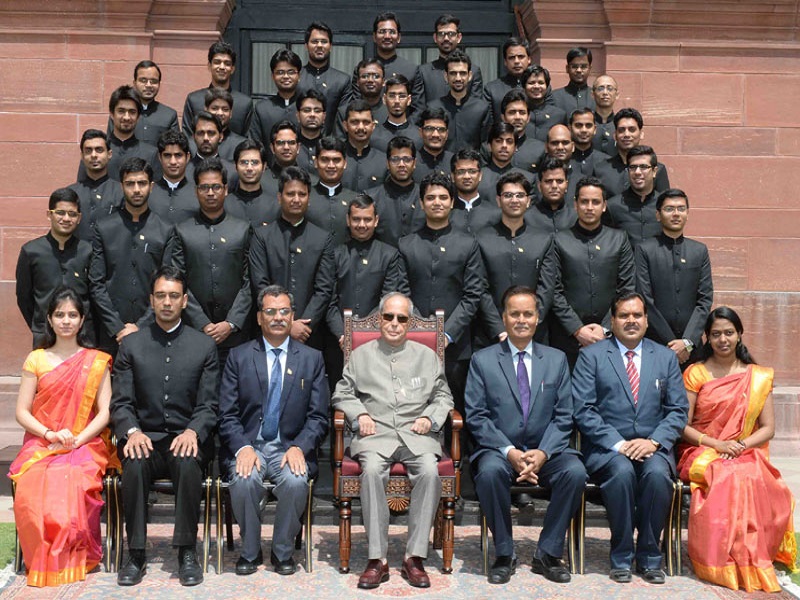 The President, Mr. Pranab Mukherjee with the Officers of the Indian Engineering Services (IES) of 2013 and 2014 Batch posted in the Ministry of Road Transport & Highways, at Rashtrapati Bhavan, in New Delhi on June 01, 2016.

India Today Has A Large Pool Of Technically Competent Engineers

Speaking on the occasion, the President said that engineers are engaged in key infrastructure sectors. India today has a large pool of technically competent engineers. We can be proud of what we have achieved since independence. From barely one million ton of steel production at the time of independence, we now produce over 90 million ton annually. From less than one lakh automobiles per year in 1947, we are now the sixth largest producer of automobiles at 4.1 million. At 644 million ton, we are the world’s third largest producer of coal. In cement production, we are behind only China with an annual output of 270 million ton.

The President said that India has 462 million users of internet with large penetration of the population. With over one billion mobile phones, the ICT sector is turning out to be a major platform for the next stage of growth and transformation in our country. India has the second largest road network in the world with a road length of 4.7 million kilometre.

Our road network transports more than 60 percent of all goods and 85 percent of passenger traffic in the country. The value of our roads and bridges infrastructure asset, which was US$ 6.9 billion (roughly Rs. 46,000 crore at today’s exchange rate) in 2009, is expected to reach US$ 19.2 billion (or approximately Rs. 1.3 lakh crore) next year. However, we must continue to strive to move forward keeping in mind the development requirements of our country and its huge population.

The President said that the Engineering Service would provide the officers an opportunity to serve the society and they would be entrusted with tremendous opportunities at a young age. They should give back to society as the society had invested in them. Besides, they should remember Mahatma Gandhi’s talisman of thinking of the welfare of the poorest of the poor in order to arrive at correct decisions. If they consider their job as a mission, they would be able to have maximum job satisfaction.

Officers of Indian Engineering Service of 2013 & 2014 batches are presently posted in the Ministry of Road Transport and Highways as Assistant Executive Engineers while officer trainees of 2015 batch are undergoing 35 weeks foundation training at CPWD Training Institute, Ghaziabad.

The President, Mr. Pranab Mukherjee with the Officers Trainees of the Indian Engineering Services (IES) of 2015 Batch from CPWD Training Institute, Ghaziabad, at Rashtrapati Bhavan, in New Delhi on June 01, 2016.