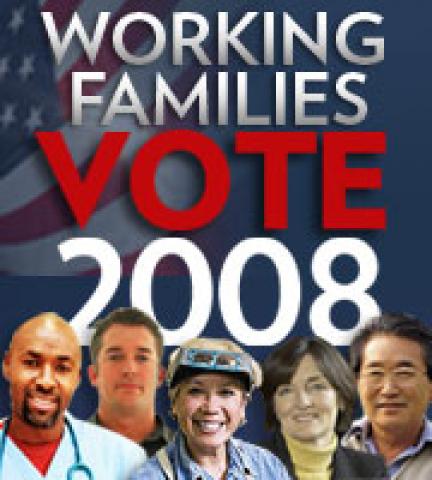 Ohio got some bad economic news. The state lost more than 11,000 jobs in July, and the unemployment rate has worsened to 7.2 percent—the highest in Ohio since December 1992.

Ohio may take an additional major job hit if DHL Express is allowed to close its air freight facility in Wilmington, where more than 8,000 people are employed. Those jobs would be another casualty of the economic agenda that puts multinational corporations ahead of communities and families.

They also would be a casualty of John McCain’s cozy relationship with lobbyists for Big Business. McCain was instrumental in making DHL’s move possible, and his campaign manager, Rick Davis, made hundreds of thousands of dollars for his firm as DHL’s top lobbyist. The AFL-CIO is telling Ohio union members about McCain’s role in the DHL deal through direct mail and worksite fliers.
And how about the Washington insider and corporate lobbyists who are the only ones profiting from this economy? Former Sen. Phil Gramm—a sometime McCain adviser who is still a “top prospect” for a post in a McCain administration—outrageously said the United States is in a “mental recession” and that those who think the nation’s economy isn’t in great shape are “whiners.” Maybe he should ask the thousands of workers who recently lost their jobs in Ohio this month whether they are whiners.
Meanwhile, McCain once again this weekend proved he’s out of touch when he claimed you’re rich only if you make more than $5 million a year. And he’s skipped votes this summer to extend unemployment insurance for struggling workers.
The U.S. economy has hit its own 15-year low. For the first time since the end of the 1992 recession, the “misery index”—the unemployment rate plus the inflation rate—is in double digits. Prices for food, fuel and health care are rising, and combined with stagnant wages and high unemployment, families are having a hard time keeping up.
McCain, who married a multimillionaire and has spent 26 years in Congress, is completely shielded from these realities, and his statements and policies reflect it.
Speaking to an audience of union members in Nevada on Sunday, Barack Obama pointed out that under the Bush administration, incomes have dropped and jobs have moved overseas, leaving millions of families to face debt, bankruptcy and foreclosure. Obama said the next president must make sure the economy works for everyone and that families can rely on good jobs, affordable health care and a secure retirement:
This election is about whether we are going to maintain and sustain the American dream, for ourselves and for the next generation.
Obama pointed out the difference between his agenda and McCain’s on taxes, health care and energy, noting that McCain has surrounded himself with Bush allies who are pushing the same old policies and negative campaign strategies of the past eight years.
The jobless numbers in Ohio tell a story that’s true in communities across the country: Jobs are disappearing, and families are suffering. That’s the real issue at the heart of this election. Can Ohio families—or any working family—afford four more years of the same economic agenda that lines the pockets of corporate elites but leaves everyone else behind?
Filed under: US
Share Tweet Pin G Plus Email
previous article: Trumka: Workers Will Come Together To Vote in 2008
next article: FEMININITY