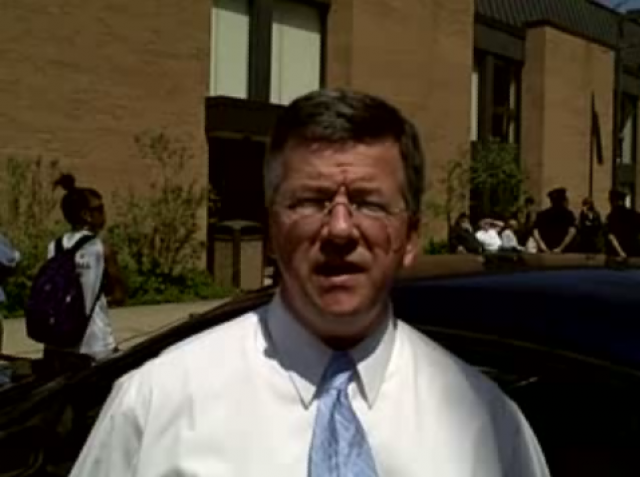 As Arizona Sen. John McCain, the presumptive Republican presidential nominee, travels across the country, he’s getting tough questions from union members who want real answers on what McCain will do to help working families.

AFL-CIO union members came out in force in Ohio yesterday, with nearly 60 union members and Working America members greeting McCain as he held a high-priced fundraiser in Toledo. More than 20 union activists turned out at a McCain event in Youngstown. (See video.)

Jaladah Aslam, an AFSCME member from the Youngstown area, pointed to McCain’s votes against overtime protections and his proposal to tax health benefits as reasons that he just doesn’t get it.

Certainly, those of us in labor know where this man stands on issues of working people….John McCain doesn’t have a clue what it takes to make America work.

Here’s more evidence that McCain is out of touch. He decided to tout his support for job-busting trade deals in front of a shuttered factory. And in his speech, he said he understands the struggles of families losing jobs and homes—because, for a while, he was behind in Republican primary polls.

McCain, the eighth-wealthiest member of Congress, isn’t in danger of losing any of his nine homes, and his tax proposals would overwhelmingly benefit the very wealthiest at the expense of essential programs like Medicare. He’s voted against the minimum wage, and he’s argued that the past seven years have been a time of “great progress economically.” The fact is, his economic policies are designed to benefit the millionaires at his Toledo fundraiser and the corporate lobbyists who run his campaign, not working families.

In his Youngstown speech, McCain again claimed to offer solutions to the challenges of health care and housing. But he isn’t offering the policies America needs. He should formulate health care plans that covers everyone and cuts costs—unlike the one he’s proposing, that could raise taxes and decrease coverage. He should push for a moratorium on foreclosures. He should pledge to sign the Employee Free Choice Act and oppose bad trade deals like the U.S.-Colombia Free Trade Agreement.

Ohio’s unions are mobilized and ready to get out the vote in 2008. And John McCain needs to listen to what they have to say.