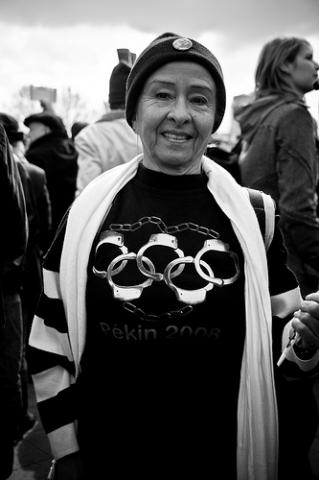 Amidst speculation that the Tibetan protestors may create trouble and disturb the peaceful passage of Olympic torch in India and renewed pressures from China, India took unprecedented steps towards security so as to allay China’s fears and to show India’s commitment for the event to pass off as peacefully as possible.

The Delhi leg of the Olympic torch rally was held at the historic Rajpath on 17 th, April, Thursday, amidst unprecedented security. Later in the night the torch left for Bangkok.

The massive police corden kept public participation to the minimum and effectively curtailed Tibetan attempts at disruption. The security measures ensured that there was no repeat of the disruptions witnessed in London, Paris and San Francisco.

Surrounded by over 17,000 poilcemen in a three layer security corden,the Delhi Chief Minister Shiela Dixit handed over the Olympic flame to the Indian Olympic Association (IOA) president Suresh Kalmadi after it was lit by Beijing Olympic Organising Committee Official Jiang Yu in the backdrop of Rashtrapati Bavan.

The ‘Flying Sikh’ Milka Singh led the relay of a total 70 sportpersons and celebrities took quick turns to hand over the torch down the Raisina Hill to the India Gate.

The torch covered 2.3 km in 35 minutes with the relay guided by the Chinese security guards in blue and white track suits.

Delhi Police Commandos in red and white sportswear ran alongside the torch to prevent any attempt on disruption.

The relay ended with tennis stars Leander Paes and Mahesh Bhupathi lighting the cauldron at the India Gate. After this the flame was taken in a lantern to the airport for its 12 th leg in Thailand.

Though strong winds caused the flame to go out a couple of times, the Tibetan protestors were unable to come anywhere near the torch. Police action started on Wednesday itself  and some 250 Tibetans have been detained or arrested.

The heart of Delhi had many checkpoints and traffic away from the Lutyen’s Delhi was also affected since the police kept the people off the roads.The authorities also curtailed bus services and Delhi Metro’s approach line to the site of the torch relay.

A parallel torch relay called ‘Torch for Tibet’ ended a km away from the main venue in which, the former defense minister George Fernandes and others participated to show their solidarity for Tibetans in China.

Atlast, the Olympic torch rally, with much hype and glory, has passed off peacefully without any untoward incident, amidst unprecedented security, perhaps much to the satisfaction of China.