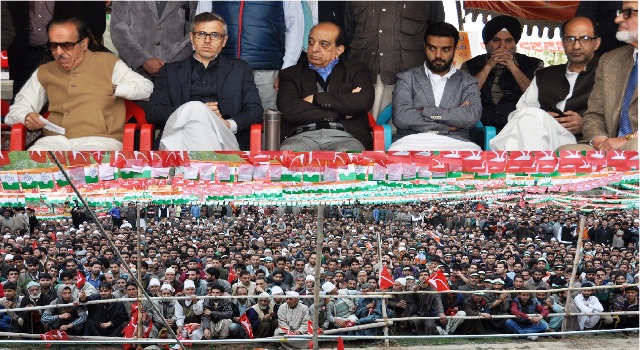 Beerwa (Budgam),April 26, (Scoop News)- Chief Minister, Omar Abdullah who is also working President of National Conference Saturday said that current Lok Sabha Election is an important occasion particularly for the people of Jammu and Kashmir to put their wight behind the NC-Congress joint candidates to ensure defeat of the anti Jammu and Kashmir forces. “You have to be united to stop the attempt of communal and deceptive forces to be at the helm of affairs in New Delhi”, he said while lashing out at the bonhomie between PDP and BJP.

Addressing an Election rally in Beerwa Budgam this afternoon, Omar Abdullah said that people of the State have to make a choice between communal forces and those representing aspirations of all sections and all regions of the Country. “The current Lok Sabha Elections have put you to a historic test”, he told the people and said that they have to exercise their franchise whole heartedly in favour of NC-Congress candidates to give a befitting reply to deceptive forces represented by PDP in the State and BJP at the Center. He said that time has come when the people of the State have to rise to the occasion by exposing the elements who divide them on different counts for petty power politics.

Omar Abdullah said that National Conference represents the aspirations of the people of Jammu and Kashmir and has always carried forward its agenda for equitable and inclusive development of the State. “We are committed to march ahead on this agenda seeking prosperity, peace and political stability in the State”, he said and added that the track record of NC and its leadership is full of sacrifices for the larger interests of the State.

Taking PDP to the task for extending covert and overt support to BJP and its Prime Ministerial candidate in the current Lok Sabha Elections Omar Abdullah said that power hungry PDP leadership is out to barter the interests of the State and its people for obtaining blessings of Narendra Modi and BJP which founded this party in the State to act as its extended arm and “B-team”. He said despite fully knowing the ideology and agenda of BJP against Jammu and Kashmir PDP is openly out to provide tactical support to BJP in Jammu and Kashmir.

The Working President National Conference asked the people to beware of the double faced PDP leadership who in one or the other garb attempt at creating confusion in the minds of people by flaring up tension and dividing the society on regional and religious lines. Omar Abdullah said that since its inception in the State PDP is nurturing a propagandist approach and using deceptive politics to be in limelight and grab the power. He asked the people to read between the lines and punish the clandestine alliance between BJP and PDP against Jammu and Kashmir.

Omar Abdullah said that the best way to scuttle this unholy bonhomie between BJP and PDP is that the people of the State should come out in large number in favour of National Conference-Congress candidates and help in bringing a Jammu and Kashmir friendly government in the Centre that would take equal care for growth and development of all sections and all regions of the Country. He said Rahul Gandhi represents this kind of an approach as he symbolizes communal harmony, commitment to all sections of the society and holistic development of India. He said that in Rahul Gandhi Jammu and Kashmir has found its sincere friend who has been always been there to help the State.