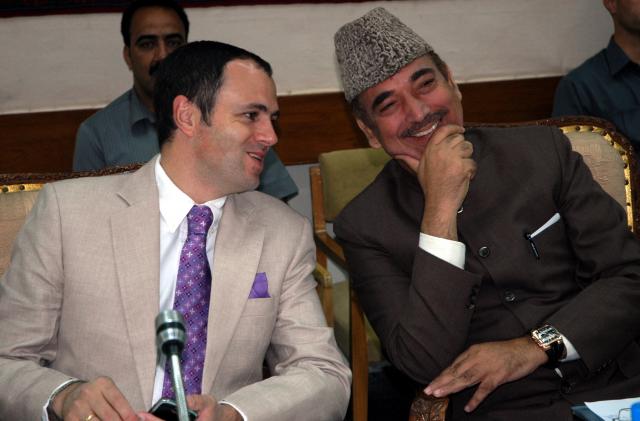 The Chief Minister was jointly chairing a health sector review meeting with Union Minister for Health and Family Welfare, Ghulam Nabi Azad, at SKICC in Srinagar.

Appreciating Mr.Azad for launching a high category infrastructure development programme in health sector of J&K, Mr. Abdullah sought Union Health Minister’s help in accomplishing the task and consolidating health sector to achieve objectives of cent percent coverage. “In most of our far off hilly areas, populations are scattered and accessibility is most difficult. In a situation like this, there should be some shift in the general policy of providing grants to the state by the Union Government.

The Chief Minister said besides completing the huge health sector infrastructure, adequate number of doctors and paramedical staff with necessary equipment has to be put in place to make these hospitals functional. “Liberal Central assistance is a must to achieve this stupendous task,” he said, adding Mr. Azad was himself aware of this requirement of the State.

The Chief Minister expressed hope that Mr. Azad would not only extend his support in getting special health schemes approved at the Central level for J&K, but would also use his good offices in other Ministries for focusing on the development of the State.

Expressing confidence that the youngest Chief Minister of the State would infuse new energy in the development process, Mr. Azad assured full Central assistance to the State for propelling healthcare scenario of the State.

The Union Health Minister said during his tenure as the Chief Minister, he had launched fast-track infrastructure development for about 33 district and sub-district hospitals, of which, he said 18 were completed and rest were under-execution. He said heavy rush, especially in maternity wards in city hospitals, prompted him to go for large-scale infrastructure creation at district and sub-district levels so that people of rural areas could avail healthcare facilities nearer to their locations and heavy rush on city hospitals is reduced to a greater extent.

Mr. Azad said State government would get Rs. 50 crore each for the development of 200-bed maternity hospitals at and to cater to the needs of people. He said this grant was assured by his predecessor as a special gesture towards J&K. “I, as Union Health Minister, now assure the State that you will receive the amount for the purpose”, he added.

Mr. Azad, laying stress on upgrading healthcare institutes in rural and far-flung areas, said this aspect requires focus to address the grievances of people. “Union Health Ministry would provide every assistance under National Rural Health Mission to the State to strengthen this sector and put in place manpower to run the health centres in these areas”, he said.

Chief Secretary, S. S. Kapur, in his address, identified areas where State government is seeking Central assistance for upgrading healthcare facilities. He also referred to the proposals submitted by the State government to the Centre in this regard and added that J&K requires special assistance in getting doctors trained so that super-specialty disciplines could be provided with faculty members. He also sought enhancement in PG seats for J&K so that more doctors could be deputed for post-graduation.

The Chief Secretary also gave details of administrative measures taken to provide necessary manpower to the healthcare centres, especially in rural areas. He said special incentives for working in most difficult areas are in vogue in State to persuade doctors to work in rural and far-flung areas.