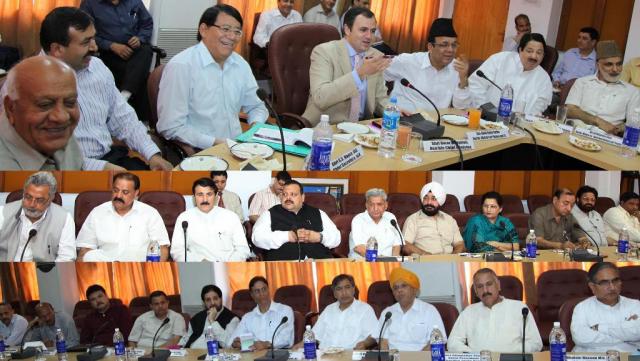 Jammu,March 31 (Scoop News) -Chief Minister,  Omar Abdullah held a meeting of  the political parties and independent legislators today at Civil Secretariat in Jammu to discuss the issues pertaining to the payment of arrears on account of implementation of 6th Pay Commission recommendations and enhancement of retirement age from 58 to 60 years.

At the outset, the Chief Minister gave the background of the state of economy of the State and reiterated the commitment of the Government to resolve all issues of employees. He stated that despite resource constraint, the Government has already acceded to most of the demands of the employees which include release of pay scales to the State Government employees and the PSUs in the light of the 6th Pay Commission recommendations. This has entailed an additional annual expenditure of Rs.1800 crores.  It was also highlighted that despite limitation of resource, J&K was one of the few States which has implemented recommendations of the 6th Pay Commission.

The participants deliberated at length on various aspects of the issue of enhancement of retirement age from 58 to 60 years, particularly in the context of its impact on the ever increasing problem of unemployment in the State. As no clear consensus could be evolved on this highly sensitive issue, it was decided that this needs to be deliberated upon further with different stakeholders, including the employees, with a view to arriving at a fair and rational conclusion.

Regarding the issue of payment of arrears on account of implementation of the 6th Pay Commission recommendations, the Government reiterated its commitment to meet this genuine demand of the employees which requires a huge amount of Rs.4200 crore. While appreciating the efforts made by the government to secure resources for payment of pay arrears to the employees, the participants unanimously resolved to approach the highest levels in Government of India in the shape of an All Party delegation for providing the required resources to the State as a special dispensation.

It was also decided that before leaving for , the All Party delegation shall hold extensive discussions with the representatives of the employees unions for better appreciation of their point of view. In the end, all the participants made a joint appeal to the employees to exercise restraint and allow a reasonable time to the Government for further consultations to find an amicable and practical solution to their problems. It was resolved by all the participating members that in a democratic set up the path of dialogue and consultation has to be pursued to find mutually acceptable solutions, and all functionaries of the Government have to be conscious of their responsibilities towards the public at large.